Stories from the Frontlines

A podcast by Community Action Works 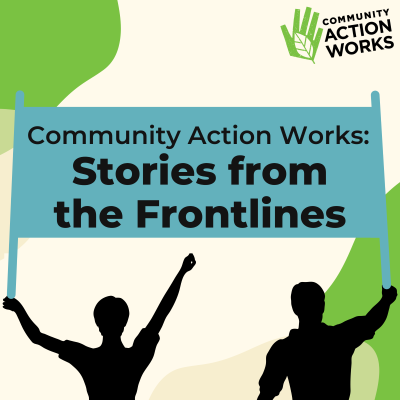 When our health and environment are threatened by pollution, it’s often up to everyday people to make change. In this podcast, we’ll bring you stories from the everyday people at the frontlines of pollution threats in the Northeast and how they’re leading the fight for real, lasting change in their communities and beyond.

This podcast is hosted by Mireille Bejjani and Shaina Kasper of Community Action Works and features local community leaders from across the region.

Our region’s electric grid operator, called ISO-NE, is keeping us hooked on fossil fuels. But, everyday people across the Northeast are rising up to stop polluting energy projects and push ISO-NE to protect our health and our climate now. This season will highlight the stories of community leaders who are bringing their neighbors together to fight fossil fuels and polluting power plants and unite behind clean, renewable energy solutions.

Episode 8: “Follow the Money”
It’s the last episode of this season of Stories from the Frontlines! After talking about seven local energy fights across the Northeast, we’re bringing all the pieces together to discuss the energy grid as a whole. What exactly is ISO-NE, how is it keeping us hooked on fossil fuels, and what does a better energy future look like? Alice Arena (Fore River Residents Against the Compressor Station), John Walkey (GreenRoots), and Monte Pearson (350 Massachusetts) share their personal experiences and their energy expertise.

Episode 7: “The Last Gasp”
This week’s episode features Michele Marantz from the Longmeadow Pipeline Awareness Group. She and many others have spent the last several years fighting to stop a new fracked gas metering station in Longmeadow, MA and a new pipeline from Longmeadow to Springfield. Tune in to hear Michele talk about working in coalition with other communities, building political power, and understanding the complexities of our gas permitting system.

Episode 6: “Alien Language”
Hear the story of John Walkey from GreenRoots, an organization in Chelsea, MA. John has been fighting to stop an electric substation from being built in an overburdened community, in a flood zone, across from a playground… next to giant tanks of jet fuel. Listen to John talk about navigating the overlapping obstacles of technical jargon, language barriers, and a pandemic all while finding the hope to keep building toward a just and healthy world.

Episode 5: “26 Years”
Hear from Mary Fite, a community member in Bow, NH and a member of 350 New Hampshire Action. Mary found out in 2019 that there was a coal plant in the town that she and her family had just moved to in order to escape pollution elsewhere, and she immediately started fighting back. You’ll hear Mary talk about the financial misconceptions around this plant, the importance of holding polluters accountable, and what being an activist means to her.

Episode 4: “A Backhanded Compliment”
This episode features Susan Smoller from Breathe Clean North Shore. She and her neighbors are fighting a proposed fracked gas power plant in Peabody, MA. Listen to Susan share why she first got involved, how lack of transparency has been a key challenge of the campaign, and why this plant makes no sense given our state’s environmental justice laws and our planet’s climate crisis.

Episode 3: “The Wider the Net, the Stronger the Fight”
In this episode, you’ll hear from Rosemary Wessel and Jane Winn from the Berkshire Environmental Action Team (BEAT). They’re spearheading the Put Peakers in the Past campaign, aiming to shut down polluting fossil fuel power plants that are rarely used anymore. Listen in to learn about their corporate strategy, the effect these plants have on the community, and their vision for our electric grid’s future.

Community Action Works · The Wider the Net, the Stronger the Fight

Episode 2: “Lose the Forest for the Trees”
In this episode, you’ll hear from Ian McDonald, a member of No More Dirty Power in Killingly. Hear him tell the story of the fight to stop a second polluting power plant in one Connecticut town, from the first red flag in 2016 to where the campaign stands today.

Community Action Works · Lose the Forest for the Trees

Episode 1: “Call Them a Banana!”
In this episode, you’ll hear from Alice Arena, a member of the Fore River Residents Against the Compressor Station who is fighting a fracked gas compressor station in Weymouth, MA. Hear about the community facing this fossil fuel threat, why Alice was inspired to take action, and where this 7-year campaign stands today.