[Boston] – Citing growing evidence of pervasive lead contamination in schools’ drinking water, a coalition of lawmakers, public health, community, and environmental leaders today launched a new Get the Lead Out campaign. An analysis by MASSPIRG and Environment Massachusetts of 16 state laws gave Massachusetts a grade of ”D”, inadequate to prevent children’s drinking water from becoming laced with lead at school.

“Schools and daycare centers should be safe places for our kids to learn and play, but Massachusetts is in the back of the class when it comes to protecting our kids from lead in drinking water,” said Deirdre Cummings, Legislative Director with MASSPIRG. “Kids’ developing brains are especially susceptible to highly toxic lead so it’s time to get the lead out.”

A new report by MASSPIRG Education Fund and Environment Massachusetts Research and Policy Center shows that lead in drinking water is pervasive across the country, and most importantly a significant problem in Massachusetts where half (49.7%) of the more than 40,000 taps tested at our public schools as of Jan 6, 2017 found some level of lead in the water. The vast majority of those lead levels were in concentrations greater than 1 part per billion.

“Lead is a potent neurotoxin, affecting the way our kids learn, grow, and behave,” said Dr.

Hayley Teich, Pediatrician and Staff Physician at the East Boston Neighborhood Health Clinic and a Fellow of the American Academy of Pediatrics. “There is no safe level of lead for children.”

Lead is known to be harmful to children’s health, even at low levels of exposure. For example, a study in Wisconsin found that fourth graders with relatively low levels of lead in their blood scored lower on reading and math tests compared to children without elevated lead levels.

The American Academy of Pediatrics has concluded that more than 24 million children in the United States will lose IQ points because of lead exposure.

All too often, schools (and homes) have pipes, plumbing and/or fixtures that leach lead into drinking water. In some cases, old service lines – the pipes that brings water from the mains in the street into buildings – are made entirely of lead.

“Our kids deserve better,” said Representative Lori Ehrlich chief House Sponsor of An Act Ensuring Safe Drinking Water at Schools and Early Childhood Programs. “Parents in Massachusetts should rest assured that when their child drinks from a bubbler at school their developing brains are not being harmed by a neurotoxin in an entirely preventable situation.”

An Act Ensuring Safe Drinking Water at Schools and Early Childhood Programs, HD 3453/SD1985 requires the removal lead service lines, the largest single source of lead in water; the installation of NSF-certified filters on faucets or fountains; and the testing water at schools regularly. It also requires the immediate shut-off of outlets where water contains more than one part per billion as recommended by the American Academy of Pediatrics.

“No parent should have to worry about their child drinking water with lead,” said Senator Joan Lovely, chief Senate Sponsor. “We have got to do better than that. We owe it to our kids.”

“Everyone should have access to clean, safe drinking water — especially our kids, whose health is most at risk from lead pollution,” said Ben Hellerstein, Director of Environment Massachusetts. “With thousands of tests showing lead in Massachusetts’ schools, we can’t afford to waste any time to protect children from this clear health threat.”

“Do we really want to wait for more tests to show that our kids have been drinking lead?” asked Sylvia Broude, Executive Director of Community Action Works. “Parents are especially eager to see the bill move and deserve to know that their children are safe. It’s time to get the lead out.”

The coalition’s counterparts are working with doctors and parents and community leaders in seven other states to advance policies that Get the Lead Out of schools and daycares. 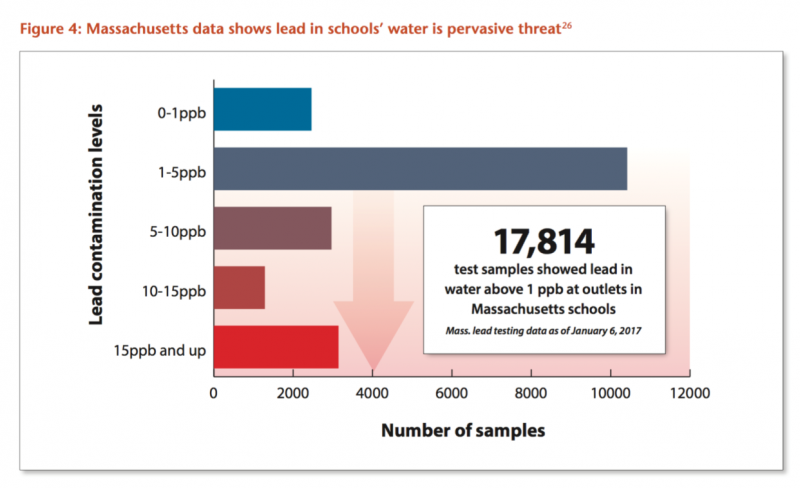 Half (49.7%) of the more than 40,000 taps tested at our public schools as of Jan 6, 2017 found some level of lead in the water. The vast majority of those lead levels were in concentrations greater than 1 part per billion.

Environment Massachusetts is dedicated to protecting our water, air and open spaces. We investigate problems, craft solutions, educate the public and decision-makers, and help the public make their voices heard in local, state and national debates over the quality of our environment and our lives.

Community Action Works is a New England-wide public health and environmental nonprofit that organizes with communities to address local environmental threats and develops new leaders to strengthen the environmental movement.