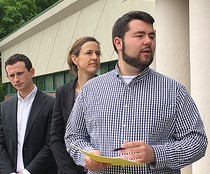 Jesse Lederman was only 14 years old when he first started organizing against a proposed incinerator in Springfield, Mass. Today, Jesse has been elected city councilor in his hometown — and the incinerator has not been built.

When the campaign to stop the incinerator began ten years ago, there weren’t many organized groups working for environmental justice in Springfield. But the city was already struggling with poor air quality that would be further compromised by the incinerator smokestack, and people joined together to halt the plan and protect their home. They reached out to Community Action Works for community organizing skills and resources to help them build and win their campaign.

“Community Action Works is a great resource for communities,” said Jesse. “Ultimately, it was the tools, resources and background knowledge they brought which helped empower our community to win the fight.”

Help us keep supporting grassroots groups in standing up to big polluters by giving today.

The campaign to stop the incinerator brought a lot of people together, and the organizing didn’t stop there.

“This launched a movement in Springfield that is still ongoing and has become really strong,” said Jesse. “The city is now taking steps towards a sustainable Springfield at the urging of activists that originally became involved in this work because of the incinerator.”

A small group of dedicated organizers has transformed into a coalition of more than 50 organizations working on a variety of issues across the city, led by groups like ARISE for Social Justice, now at the forefront of a vibrant environmental justice movement in Springfield. And as the movement has grown, so has consciousness around climate justice locally and globally.

At Community Action Works, we build grassroots leadership because we know local leaders make change happen. Your gift supports leaders who will grow our movement across the region.

Thank you for supporting leaders at the local level. As this year comes to a close, we are proud to stand with you.