In Vermont and beyond, landfills are not the answer 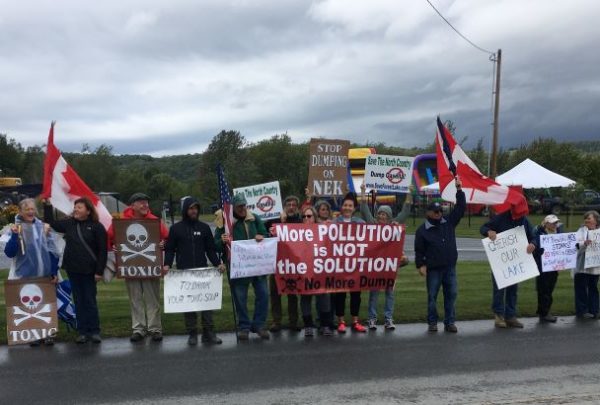 Coventry is a beautiful town in northeastern Vermont, bordering the pristine Lake Memphremagog that stretches into Canada. It’s also home to the state’s only active landfill, and when that landfill was set to expand, neighbors raised the alarm. The landfill’s plan would likely lead to toxic waste contaminating the lake, which is the drinking water source for 185,000 Canadians.

When you think of landfills, you probably aren’t thinking of drinking water. But the truth is that all landfills eventually leak, and when they do, it’s toxic. Rain and melting snow fall onto the landfill, running through tons of trash and picking up toxic remains along the way, forming a poisonous cocktail called leachate. That toxic leachate finds holes in the landfill liner—if there’s any liner at all—and leaks out into groundwater, and then all too often, drinking water.

In Coventry, neighbors were especially concerned about the “forever” chemicals, known as PFAS, which were coming out of this landfill. So they formed a group called Don’t Undermine Memphremagog’s Purity (DUMP) to protect their lake and health from toxic leachate.

Unbelievably, the landfill was taking its toxic leachate to neighboring Newport, where it was released into the lake. With your help, DUMP organized to stop this plan, and they won.

However, as long as the landfill is open, the toxic leachate has to go somewhere. We’re organizing in other towns and cities across the region to get them to reject taking this toxic leachate too.

But we know the real long-term solution is that we can’t keep using landfills. Landfills release methane, a greenhouse gas 56 times more potent than carbon dioxide. They leak and pollute drinking water. And more landfill space buys another few decades of ignoring the issues that created our trash problem in the first place.

We believe in a zero waste future where no community is harmed by leaking landfills anywhere. Your support makes that future possible.