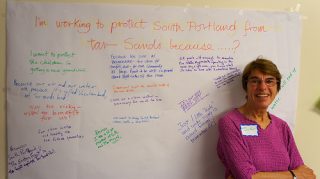 Canadian tar sands oil is some of the dirtiest in the world. And ExxonMobil was planning to use a World-War-II-era pipeline to pump millions of gallons of the oil through Vermont, New Hampshire and Maine, crossing over rivers, the Sebago Lake watershed and right out into Casco Bay, risking nearly all of Southern Maine’s drinking water.

Not to mention the pollution that would be fuming out of two new 70-foot smokestacks built to burn off the toxic gas before loading their product onto tankers in South Portland. 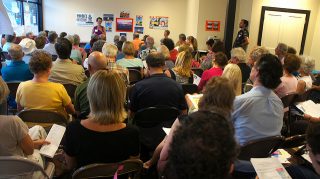 When Rachel Burger, a South Portland resident and new grandmother, heard about all this, she knew someone had to step in to stop it. So she began meeting with some of her neighbors to see what they could do. 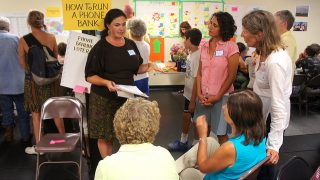 One of the important resources that Community Action Works provides to communities is research and information. When there’s a pollution problem or a community wants to take action to be more sustainable, it can be hard to know where to start. So when Rachel connected with our community organizer in Maine, the first thing we did was figure out what was our best strategy for protecting the health of South Portland residents.

Next we networked the group. Already, Community Action Works community organizers were working with other towns across New England to stop dirty and dangerous pipelines. We made sure that these newly formed community groups were linked to share strategy, tactics and hope. 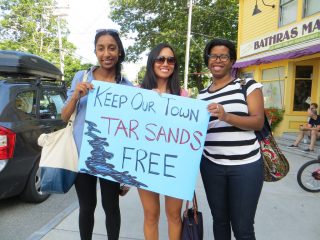 Then we got to work. We worked side by side with group members to build community support and win. Most folks have never spoken at a hearing, held a press conference or asked their neighbor to sign a petition.

We worked with the new group, Protect South Portland, to come up with a plan to collect the 1,000 signatures they would need to qualify a question to protect South Portland’s waterfront to be put on the ballot. Together we spent days out in the field working with the community to hit their goal. At the end of the two weeks, almost everyone in town had heard about the issue. 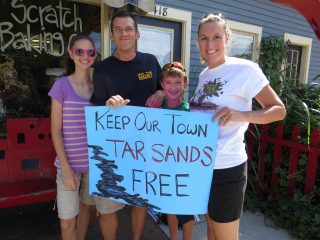 The vote was closer than we could have imagined. Even with hundreds of people volunteering to get out the vote to pass the ordinance, in the end the campaign lost by only 197 votes. In all the oil companies had spent $117 per vote they received. They used that money to spread misinformation and buy good-will by purchasing new firetrucks for the city.

Defeated, but not deflated, Protect South Portland regrouped. All our work during the campaign had convinced everyone in the city that the threat of tar sands was serious and they went on to pass the ordinance through the City Council.

“South Portland Maine found itself on the frontlines of a global fight. And when your opponent is a multi-billion-dollar oil company, you need all the help you can get. We are so glad to have Community Action Works on our side.” — Rachel Burger, Protect South Portland 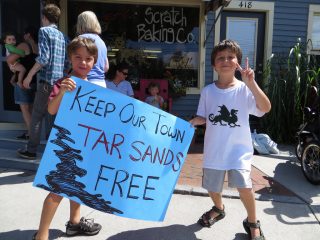 Now realizing the power they have, Protect South Portland have continued to work together with Community Action Works to grow and take on new issues. Last year Rachel and her neighbors launched the project “Bees, Bays and Backyards” to successfully pass a ban on toxic pesticides in town. We can’t wait to see what they’ll do next!

Want to find out more about how Community Action Works can help you tackle a pollution threat in your town? Get in touch here.