You organize because you want to build power and win your campaign. Online organizing is no different, and just like in your on-the-ground organizing, you need to be strategic and choose the right tools and tactics to win.

Action Network is a tool designed to help you build your power online. Action Network was built by activists who wanted to share these tools with other activists, and the platform includes petitions, emails, letter writing and more. You can use Action Network to find and recruit new activists, keep in touch with supporters, target decision makers, and keep your list well organized along the way.

Many grassroots groups struggle to keep their lists organized, start online petitions only to realize they don’t get to keep the contact information of the people who sign it, or use online organizing tactics without a clear plan or strategy. But digital organizing can be powerful with the right tools and resources, and Action Network is a great place to start building your power online. With Action Network, you can keep all the contact information, organize your list, and recruit supporters to take action on- and offline.

That’s why Community Action Works is offering trainings and side-by-side digital organizing on Action Network to get you started. Got questions or want to learn more? Contact us!

Action Network can be used to drive people to action both on- and offline. In this example, Community Action Works partnered with Arise for Social Justice to stop a plan to pass off polluting biomass incineration as renewable energy. This plan could have directed funds meant for clean, renewable energy to a proposed incinerator in Springfield, MA, which is already the asthma capital of the U.S. Together, we used Action Network to recruit people to attend a public hearing on this issue.

Step 1: Collect information.
We needed to find the right people who cared about this issue and would be willing to take action. So, we created a letter campaign on Action Network and shared this page with our existing networks—including sending an email to people we know in Massachusetts, sharing it on social media, and asking other people to share it, too.

Step 2: Recruit people who sent a letter to come to the meeting.
After we spent a few weeks sharing the letter campaign, we had a list of more than 250 people who had sent a letter. Because Action Network allows you to keep all the data, we had email addresses and phone numbers for everyone who had signed—and we knew they cared about this issue. So we sent them an email about the hearing and asked them to join us, and then followed up with a text message for people who were in the area. 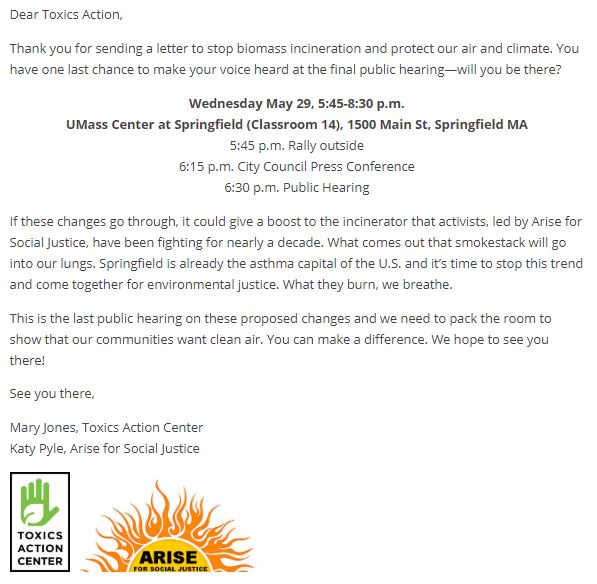 If we had had more time, we would have done things a little differently—we might have held a recruitment meeting to bring people together to connect and learn more before the hearing, and identify leaders who might help us run this campaign. We also did a lot of traditional recruitment—we reached out to coalition partners, went door-to-door talking to neighbors in Springfield, and made phone calls to members to invite them. The hearing was a success—more than 100 people came and there were hours of testimony against the plan.

Is Action Network easy to use?
Action Network is very user-friendly. Community Action Works also offers trainings and side-by-side technical assistance to help you make the most out of the tools available. Contact us to learn more.

How can I get set up?
Contact us to get started. We’ll set up a quick call to make sure it’s the right fit. From there, we’ll create your account, send you the login information, and get started with a training on how to use your new account.