In 2015, after decades of organizing, the Pilgrim Nuclear Power Station on the coast of the Cape Cod Bay in Plymouth announced that it would close in May 2019. This major victory was followed by new challenges: cleaning up the waste, protecting the bay and the state’s second largest aquifer, and making sure that polluters shoulder the cost.

Residents such as longtime activist Mary Lampert aren’t satisfied with a plan to move nuclear waste to an unsecured location and store it in canisters that, if they leaked, could not be repaired with current technology. Each canister contains more than half the amount of radiation that was released at Chernobyl and could be here indefinitely.

Decommissioning done well is extremely expensive, and neither the longtime owner nor the likely future owner has the funds to do it well. Your support moving forward will help Pilgrim Watch and others watchdog the decommissioning process and push decision-makers to do the right thing. 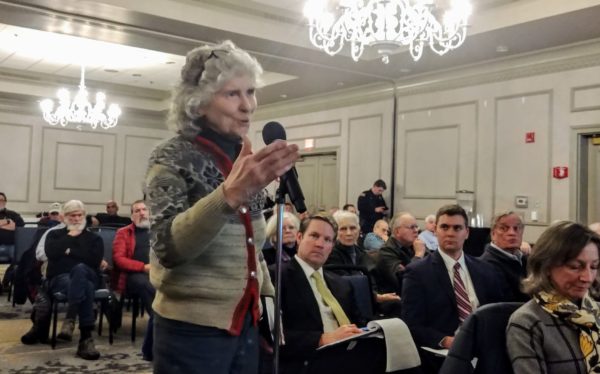 Longtime activist Pine duBois speaks at a hearing in support of safe decommissioning of the Pilgrim Nuclear Power Station in Plymouth, Mass.