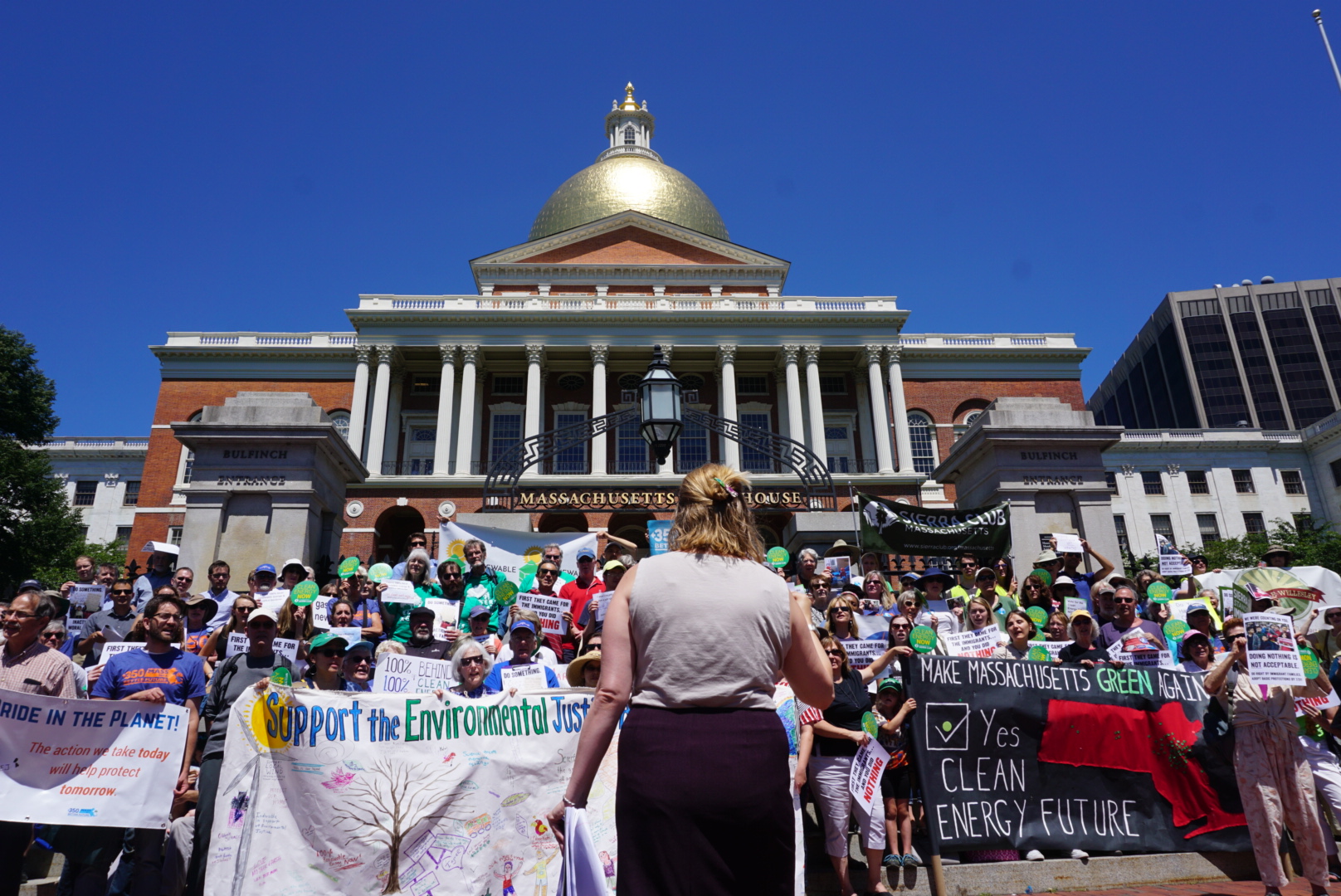 On Thursday, July 19, over 300 advocates for climate and immigrant justice joined forces to express their discontent over leadership of the House’s failure to protect the most vulnerable people and communities in Massachusetts. The 300 advocates visited both Chairman of the Ways and Means Committee Jeffrey Sanchez, as well as Speaker Robert DeLeo.

“We brought more than 300 people, waited over 25 minutes, and still, Rep. Sanchez’s office refuesed to send a single person out to even witness our assembly,” said constituent Claire Miller from Community Action Works, “Our friends from the Green Justice Coalition had a 1pm appointment, they even ceded time so that someone could come out. This rejection is outrageous.”

The advocates called on house leaders to take action to transition to 100% renewable energy as fast as possible by passing a 3% renewable portfolio standard, and protect those most vulnerable by codifying environmental justice into law, and securing the 4 Key Safe Communities Protections that passed in the Senate version of the State budget.

“We need elected officials who are willing to be leaders. Who will take action to prevent immigrant parents from being taken from their children, right here in Massachusetts. We need leaders who are able to recognize the urgency of the climate crisis and to do what’s right for our communities,” said Laura Wagner of Unitarian Universalist Mass Action. “The time for timid inaction is over. Lead, or get out of the way and let others lead.”

“By refusing to adopt even the most basic legal protections for immigrants, the Legislature abdicated its moral leadership and failed thousands of its constituents,” said Eva A. Millona of Massachusetts Immigrant and Refugee Advocacy Coalition. “But it’s not too late to right this wrong. Vulnerable families can’t afford to wait another year.”

“In the age of Trumpism, Massachusetts should be a shining beacon of hope and leadership. Instead, the Massachusetts House of Representatives has instead offered weak action on climate change and environmental justice and a complete absence of leadership on immigration justice.” said Craig Altemose of 350 Massachusetts. “This is unacceptable. The House needs to act now to protect our undocumented neighbors from harassment by the Trump administration and to take strong action — such as quickening renewable energy growth by 3% per year and providing basic protections to vulnerable communities — on the threat of climate change, which not only threatens Commonwealth communities, but is also predicted to be the strongest driver of migration in the 21st century.”

“The people of Massachusetts clearly want action on climate change,” said Emily Norton, Chapter Director of the Massachusetts Sierra Club. “From storm surges to heat waves to drought, the impacts of climate are already being felt here at home. All we are asking for is our elected representatives to actually represent us and lead when it comes to climate change. More clean energy means jobs, improved public health, keeping energy dollars here at home, and a livable planet, especially for our most vulnerable residents.”