These pipelines will never be built

A win against fracked gas is a win for all of us, and we have some great news to celebrate.

With your support, community leaders in New Hampshire have stopped the Granite Bridge fracked gas pipeline and the Lebanon-Hanover pipeline and gas depot!

After we worked with community leaders in Massachusetts and New Hampshire to stop the Northeast Energy Direct (NED) pipeline, energy companies started to read between the lines—any major pipeline like the NED was going to meet major opposition.

But what they didn’t bet on was local leaders rising up to say that no fracked gas proposal, big or small, is welcome in the Northeast. 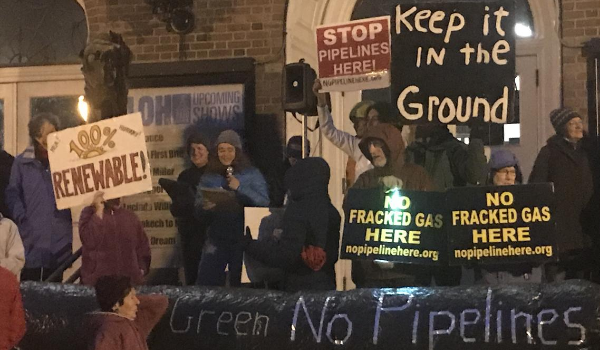 We helped local leaders facing pipeline projects in their cities and towns join together to form the Upper Valley Pipeline Coalition with neighbors in New Hampshire and Vermont, training leaders up with the skills they needed to take action.

And these groups did take action. In Hanover and Lebanon, the group Energy and Climate Upper Valley kept the pressure on for years—holding meetings, marches and a huge rally, collecting over 1,100 signatures against the project, pushing Lebanon to remove fracked gas from its master plan, showing up at every hearing and meeting to testify, and even after the Public Utilities Commission officially approved the project, the group never gave up.

The group Resist Granite Bridge, organizing to stop a pipeline from going through an energy corridor on the Seacoast, flooded the area with yard signs and won a town-wide resolution in Exeter against the pipeline.

This action paid off when both pipelines were defeated this summer, within weeks of each other.

These pipelines will never be built.

Of course, our work is never completely finished. Liberty Utilities is already back with another fracked gas proposal. But with each new proposal, we’ll be ready.

Congratulations to the members of the Upper Valley Pipeline Coalition, Resist Granite Bridge, 350NH, PLAN, and so many others for showing that building community power can stop fracked gas.