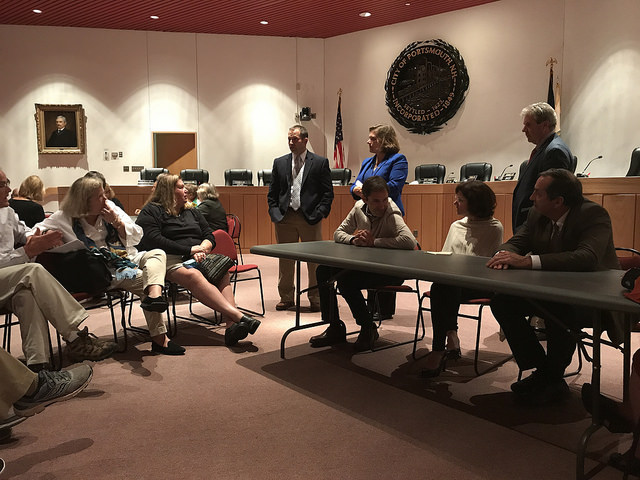 Ted and other residents of Portsmouth, N.H., speak at a city council meeting on Sept. 18 urging a city-wide organic resolution.

It wasn’t long ago that Rachel Burger, the founder of Protect South Portland, became concerned about the South Portland High School students working summer jobs applying pesticides on lawns and public spaces. Not only were these students being exposed to toxic chemicals, but the chemicals were also impacting the environment. Thanks to your support and Rachel’s tireless organizing, Protect South Portland got media attention, brought in national experts, and gathered an overwhelming amount of public support to help pass a pesticide use ordinance prohibiting toxic lawn pesticides on public and private lands in the city.

Protect South Portland’s work was significant, leading the city to become one of more than two dozen Maine communities to pass pesticide restrictions in recent years. The Portland Protectors hope to pass a similar ordinance in Portland this year.

This fight echoed throughout the region as well. Only a few stops south on I-95, Ted Jankowski was walking his dog, Arthur, on the streets of Portsmouth, N.H., and noticed the sidewalk was coated with what looked like early morning dew. Up ahead, he saw a golf cart spraying out the back. When he asked the teens wearing City of Portsmouth t-shirts what they were doing, they said they were spraying glyphosate, a pesticide linked to cancer. Ted quickly picked up his dog. As far as he knew, Portsmouth was supposed to be an eco-municipality.

After connecting with Community Action Works Campaigns he sprang into action, creating a community group focused on passing a city-wide resolution to curb pesticide spraying. Ted took to social media, collected nearly 1,000 petition signatures online, and held a seminar to educate more people in town. All his hard work really paid off and soon after getting the assistant mayor to sponsor his efforts, Ted pushed the city to pass a resolution making Portsmouth the first non-toxic city in New Hampshire. Now, thanks to members like you, organizing leaders like Rachel and Ted can continue to help others and further the fight against toxic pesticides throughout the region.