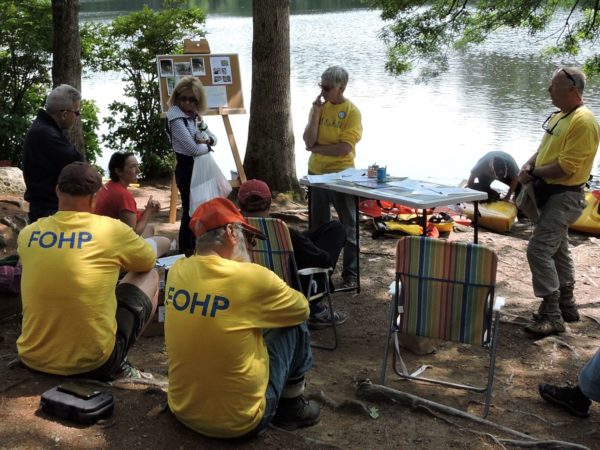 When she was a kid, Pat Keck would play with neighbors in the pond by her house, building rafts out of fallen logs during the summer and skating during the winter. Pat grew up on Field Pond in Harold Parker State Forest in Andover, Mass., in the same family house she lives in now.

She also has childhood memories of toxic pesticides. She remembers walking the half mile from her house to the bus stop, throwing gumball-sized balls her parents gave her into the wetlands around her. She later learned that those balls were DDT, and her parents had been instructed by public officials to put them right into the water.

“Growing up, you used pesticides, and you didn’t even think about it,” said Pat. “They make this stuff sound so wonderful that you can’t imagine why anyone would object.”

And unfortunately, for many pesticides, that’s still the case. Chemical companies are still promoting their products as solutions for anything from mosquitos to weeds and denying the very real problems that pesticides can cause.

“It’s the same with farmers using RoundUp,” said Pat. “Chemical companies say, how can you prove that that’s how they got sick?”

Last year, chemical giant Monsanto was ordered to pay $289 million in damages to Dewayne Johnson, a groundskeeper who got terminal cancer from using their pesticide Roundup.

Now, Pat is fighting a pesticide battle on the pond where she grew up, where state agencies in charge of the park are dumping toxic pesticides in the lake to control unwanted weeds. Fluridone and diquat are bad for the ecosystem, harming plant and animal life. And with neighbors on Pat’s side of the pond using well water drawn from the lake, the risk of drinking water contamination is too close to home.

Several years ago, Pat joined the Friends of Harold Parker, a nonprofit dedicated to taking care of the state forest, and soon after the pesticide fight came into full swing. Made up of fishers, horseback riders, mountain bikers, neighbors and more, the group knew that dumping pesticides in one of the biggest ponds in the forest wasn’t a good idea.

But what they were up against was a rubber stamped process, where plans to dump pesticides are nearly always approved and safe, non-toxic alternatives aren’t even considered. Before they could stop it, toxic pesticides were dumped in the pond anyway. And the effects on the pond were chilling.

The fight against pesticides is an uphill battle. But Pat and the Friends of Harold Parker are charging ahead to stop the pesticide treatments and restore the pond they know and love. Pat connected with Community Action Works and met activists fighting pesticides being dumped in lakes from across the state—including people who have fought back against pesticides and won. They envision an Andover that doesn’t use toxic pesticides in Field Pond, or anywhere.

“Harold Parker, to me, is where I’m from,” said Pat. “I love horses, I ride in the forest, I walk in the forest. It’s always been important to me.”

Thanks for rising with activists like Pat who are protecting the environment we call home.