One leader standing up to fossil fuels 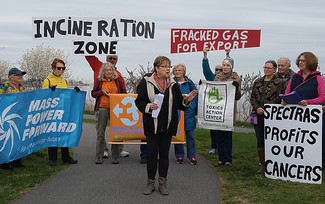 It’s been nearly four years since Alice Arena found out that a pipeline was going to cut through her town. That’s when one of the pipeline’s most dangerous components, a compressor station, was slated to be built on the last remaining green space in the Fore River Basin in Weymouth, Mass.

Compressor stations are built along fracked gas pipelines to keep the gas moving. These facilities are among the most polluting parts of pipelines, off-gassing toxic chemicals non-stop and intentionally releasing unknown amounts of fracked gas into the air during periodic “blowdowns.”

“The health effects from compressor stations go from rashes and nosebleeds to cancer and heart attacks,” said Alice. “When you’re talking about a pipeline, which in this instance goes from Pennsylvania to Nova Scotia, they need a compressor station every 50 to 100 miles.”

How do you take on a giant fracked gas company? It’s not easy. But Alice was armed with more than 15 years of community organizing experience, and she wasted no time in bringing neighbors together to form the Fore River Residents Against the Compressor Station (FRRACS).

Alice and FRRACS won support from their town and state representatives, went door to door distributing over 4,000 flyers, and packed a public hearing on the project where nearly every single person spoke out against the compressor station—including a strong showing of union workers, some of whom might have worked on the project!

Part of the reason that Fore River residents have come together so powerfully against the compressor station is that they know the devastating consequences of polluting facilities. The area is already overburdened by environmental threats and neighbors know all too well that polluting industry means disease.

“The toxic legacy of the basin really speaks to the people that live near here,” said Alice. “They’ve already seen the cancers, autoimmune disorders, and deaths in their families.”

Four years later, FRRACS is still hard at work organizing to stop the project. For Alice, that’s because organizing is the only way change happens.

“Change never comes from the top, ever. Change only comes from the grassroots,” said Alice. “Because that’s where people are affected. You have to start on the ground, build your consensus, build your truths, and work your way up.”

Her vision is for a vibrant, healthy, green community in the Fore River Basin. And with leadership from Alice and other courageous activists, we know that’s possible.