Residents would pay for reversing governor’s veto on SB365 in health, electric bills 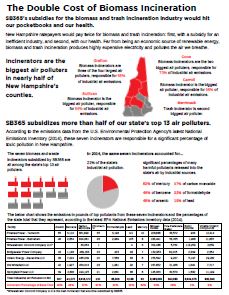 See the report: The Double Cost of Biomass Incineration.

It’s not just tree burning plants being subsidized. Also included in the bill is a subsidy for the Wheelabrator trash incinerator in Concord.

Both waste and biomass incinerators release toxins like lead, mercury and arsenic into the air that take a serious toll on our health. When exposed to the slew of metals and chemicals released by incineration, New Hampshire residents are at a higher risk for cancers, respiratory diseases, heart disease and more.

“Burning trash is the most expensive and polluting way to manage waste or to make energy,” said Mike Ewall, Founder and Director of Energy Justice Network. “Burning trees is also among the most expensive and polluting ways to make energy. There’s nothing clean or wise about paying even higher electric bills to support some of New Hampshire’s worst air polluters.”

If the legislature overrides the veto, many New Hampshire residents could also see an increase in their electric bills.

“If the governor’s veto is overturned, New Hampshire would be paying twice for dirty air and polluting energy,” said Woody Little, New Hampshire Community Organizer with Community Action Works Campaigns. “We should not pay more for energy that makes us sick. Governor Sununu got this one right, and responsible legislators from both parties should sustain his veto.”

“Hold onto your pocket books,” said John Tuthill for Working on Waste in Claremont. “The New Hampshire legislature is meeting in Special Session on September 13th to vote on a massive hidden tax, sending over sixty million dollars in subsidies to the owners of seven polluting power plants, all to be raised from Eversource and Unitil customers. Working on Waste calls on legislators to sustain the Governor’s veto on SB365.”

The report was released by Working on Waste, Energy Justice Network, and Community Action Works Campaigns. The groups prepared the report with the latest data from the U.S. Environmental Protection Agency’s National Emissions Inventory.

Energy Justice Network is national support network for communities threatened by dirty energy and waste industries, and is the leading organization supporting local opposition to biomass and waste incinerators in the U.S. For more information, see EnergyJustice.net.

Community Action Works Campaigns is a public health and environmental non-profit that for over 30 years has worked side by side with communities to clean up and prevent pollution. For more information, please visit communityactionworks.org.

Working on Waste (WOW) is a citizens’ initiative that promotes safe alternatives to waste incineration. Conservation, composting, and recycling are the best ways to manage materials that often get thrown away as “waste.” For more information on the legacy of Wheelabrator’s Claremont incinerator, review Working on Waste’s report: www.americanhealthstudies.org/wheelabrator-claremont.pdf.