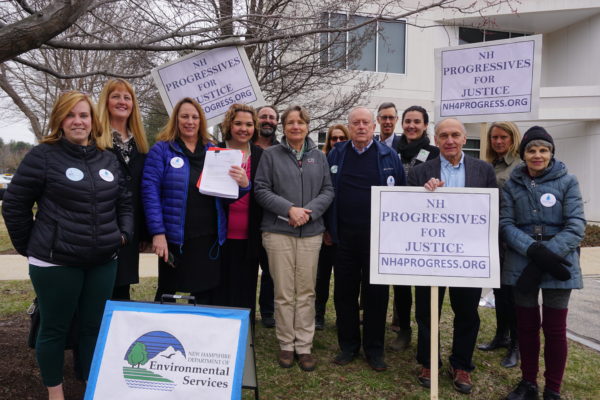 RYE, NH: The people of NH are suffering from the highest in the nation rates of bladder, breast and esophageal cancer and our children are getting cancer more than in any other state in the nation. The NHDES is required to undertake rulemaking to adopt maximum contaminants levels (MCLs) for perfluoroalkyl and polyfluoroalkyl substances (PFAS) in drinking water that are “protective of human health at all life stages, including but not limited to, prenatal development” in response to SB-309 that became chaptered law 0368 in June of 2018.

New Hampshire Safe Water Alliance, NH Sierra Club, Conservation Law Foundation, League of Conservation Voters, Union of Concerned Scientists, Community Action Works, New England Grassroots, and the Dartmouth Toxic Metals Superfund Research Program have taken The Devil We Know NH Film Series to 17 towns and cities across the state to 700 people. Over 1,100 people have signed our petition, at least 40 people have submitted separate comments urging the NHDES to enact more strict drinking water standards than proposed and more in line with 6 other states including New Jersey, Vermont, Minnesota, Michigan, Pennsylvania and New York that are being proactive to protect their citizens from these toxins in their drinking water.

A few weeks ago, the citizens of Merrimack, faced with 65 square miles of PFAS contaminated drinking water from Saint Gobain and other industry, voted by an overwhelming margin, to filter their water, instead of “blending” or diluting the PFAS, increasing their water rates 31%.

The town of Greenland Select Board commented that they want the NHDES to use the Minnesota model to enact stricter standards than initially proposed.

There is enough scientific evidence that there is no safe level of these toxins in our water and there is no concentration that does not cause health effects. NHDES we urge you to re-evaluate your proposed MCLs to prevent cancer and provide safe water for our children and families.

The sponsors and participants in The Devil We Know NH Film Series have provided the following quotes:

We call on the NHDES to enact MCLs which are protective for prenatal and early childhood exposure. Specifically targeting protection of male babies that have been shown to suffer the most pronounced reproductive maladies including reduced sperm counts and genital malformations. We must protect future reproductive capacity and reduce the rates of cancers and chronic disease in our state. We urge you to use scientific peer-reviewed information that other states like New Jersey and Minnesota have used to err on the side of precaution to protect our drinking water in NH.”

“As the NH DES deliberates about PFAS regulation in the Granite State, many of us are hopeful that the agency gives substantial weight to the science used by Vermont, New Jersey, and Minnesota to inform their respective drinking water standards. These states will reap the benefits of a healthier population, direct aid to the economy through increased work days and productivity, and lives saved. New Hampshire can and should join this group of states taking meaningful steps to reduce the burden of PFAS exposure.”

“I am pleased that the NHDES is working to protect the water supply in New Hampshire, but I feel the current proposed levels are not enough to protect our citizens, especially infants, children and pregnant mothers, however, I have concerns about the proposed Maximum Contamination Levels (MCLs) for PFAS. New Hampshire is an amazing place to live and is often voted among the best states to raise a family[i].

However, as a physician, I am concerned that may not remain true from a health perspective. The CDC has documented that New Hampshire has the highest rates of bladder, breast, esophageal and pediatric cancer in the United States. The investigation into the Seacoast Cancer Cluster is ongoing. What is understood is there is a link to environmental exposures and cancer development. While it is still unclear what, if any, a safe level of these chemicals is, the ATSDR has established Minimal Risk Levels (MRLs) for PFOA, PFOS, PFHxS, and PFNA. These are levels well below and amount that is likely to cause a health effect. The current proposed limits of PFAS concentrations for MCLs are significantly higher than the MRLs by ATSDR.

I ask that the NHDES create levels in line with the ATSDR MRLs, to protect our water, our infants and children, and all members of society. That would also place NH more in keeping with other states that have set protective levels of PFAS such as New Jersey, Michigan, Vermont and Minnesota. Please work to keep New Hampshire a wonderful, safe and healthy place to live and raise families.”

“Clean, safe drinking water is critical for health. Polluters, like 3M, DuPont, and Saint Gobain, are making billions off the backs of communities in New Hampshire and across the United States of America. These companies are dumping untold amounts of the dangerous chemicals called PFAS that are known cancer carcinogens. The sources of pollution are from manufacturing, as fire retardant foam for firefighting and military installations, and in landfills.

It is no surprise to learn that New Hampshire suffers from the country’s highest rates of pediatric, breast, bladder and esophageal cancer. New Hampshire has three sources of contamination: waste landfills, manufacturing and firefighting. The Seacoast cancer cluster has traced the contamination source to the Coakley Landfill, a superfund site leaching PFAS into the ground water. The town of Merrimack hosts the Saint Gobain textile manufacturing plant that emits air and water polluted with PFAS. The firefighting foam contamination was detected in Greenland and many other communities across the state.

This is a real problem for real people. We call on the Department of Environmental Services and Governor Sununu to protect our families from PFAS pollution and go beyond the suspect standards recommended by the EPA. The state has the chance to be bold for kids to be healthy. We must protect our drinking water by setting scientific health-based standards for all of the classes of PFAS.”

“CLF considers the problem of PFAS pollution – in drinking water, groundwater, and surface waters – to be a significant challenge in NH and around New England, one that demands serious regulatory attention. In the absence of federal leadership to control these dangerous chemicals, states around the country are stepping up to protect public health. While we applaud DES – and the lawmakers who got this ball rolling – CLF believes that DES’s proposed standards fail to protect our most sensitive population – fetuses and infants. CLF urges NHDES to set a maximum contaminant level goal of zero parts per trillion – and an MCL for all PFAS of 1 part per trillion, since it is increasingly clear that no amount of these chemicals is safe for humans.”

“New Hampshire could set strong standards to protect our water, or they could leave residents with toxics coming out of their taps. The difference is our health. These signatures show that residents want safe, healthy water. New Hampshire must step up to protect its residents where the EPA hasn’t.”

“It is vital that every NH citizen live in a community where the quality of life for all residents is valued and protected, and where elected officials and government agencies can be relied upon to represent the needs of the community on important issues. One such issue, requisite for the safety, well-being, and survival of all of us- is Clean Water. The PFAS contamination of public and private water supplies by toxins known to be associated with harmful health effects- the drinking water we rely upon to sustain life and nourish our families; has been, and continues to be, a priority issue in many impacted NH communities.

The EPA, NHDES, and NHDHHS must do everything in our power to make sure that business profits are never prioritized over human health. Steps must be taken immediately to protect communities from PFAS exposure. Bio-monitoring and health studies to monitor the health impacts known to be associated with PFAS exposure must be provided for exposed populations. The socio-economic costs of these health issues should also be taken into consideration when determining MCL’s. PFAS MCL’s must be precautionary and lowered to protect human health at all stages of life. In setting appropriate, and health protective PFAS MCL’s, NHDES must include those scientific studies considered by other states that have set more health-protective standards. Time is of the essence. The lives and health of NH citizens depend upon it.”

“The Endocrine Disruption Exchange (TEDX) has submitted comments today in response to the MCLs proposed by NHDES for PFOA, PFOS, PFNA, and PFHxS. Our conclusion is that the assumptions and professional judgements made by NHDES consistently failed to be protective of human health, particularly for vulnerable populations such as infants and those potentially exposed to these persistent and bioaccumulative chemicals for decades. Assumptions and professional judgments that need to be reevaluated include estimates of exposure for different populations and selection of critical endpoints on which to base the calculations.

After reviewing the Summary Report prepared by NHDES and new exposure modeling information prepared by the MN Department of Health, we have concluded that the MCLs for PFOA, PFNA, PFOS, and PFHxS should be <1 ppt, 1 ppt, 13 ppt, and 30 ppt, respectively. These are substantially lower, and thus more protective, than those arrived at by NHDES. Our recommendations are scientifically justifiable and based on parameters proposed or used by several other state agencies in the US.”

“In addition to providing the necessary minimum protection of the public from PFAS compounds, lowering the proposed PFAS MCLs, in particular for PFOA and PFOS, to single-digit or very low double digit parts per trillion, consistent with current science and trends in other states, would also provide the necessary regulatory framework for the MVD to legally seek restitution from the polluters of our MVD wells, so that the polluters can be held liable for paying for the cost of PFAS treatment, instead of the cost being borne by the customers of MVD, who recently voted to take matters into their own hands, due to lack of MCL support by DES and EPA, and voted to direct the MVD to spend $15 million to implement elective PFAS treatment at all of its contaminated water supply wells. Leaving the proposed MCLs at their current proposed levels leaves the entire cost burden of PFAS treatment on the backs of the MVD customers and leaves the polluters entirely free from any consequences whatsoever of their crimes! That is outrageous and is not the New Hampshire way of life that Merrimack deserves!”