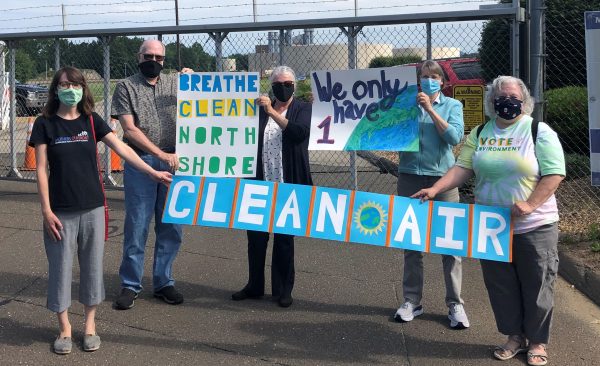 Breathe Clean North Shore is made up of neighbors in Peabody who just this year found out about a proposed power plant in their city. That power plant would run on fracked gas and oil.

Sudi Smoller is one person who’s taking action to stop this plant. When she found out about the proposal, she was shocked. Sudi keeps up with the news in town, but she hadn’t heard anything about it. So she joined together with her neighbors to form Breathe Clean North Shore, and now we’re partnering with our friends at Massachusetts Climate Action Network to support them in this fight.

Since the energy produced at this plant would go into the region’s energy grid, the campaign to stop this power plant goes well beyond Peabody city limits. As states take action for a 100 percent clean and renewable energy future, our region’s electricity grid operator, ISO-NE, is keeping us dependent on polluting fossil fuels.

Over and over, ISO-NE chooses to extend the life of the most polluting power plants, pushes new fossil fuel plants like in Peabody, and thwarts clean energy proposals. We want an energy grid that responds to the needs of ratepayers and the people living with climate catastrophe and pollution.