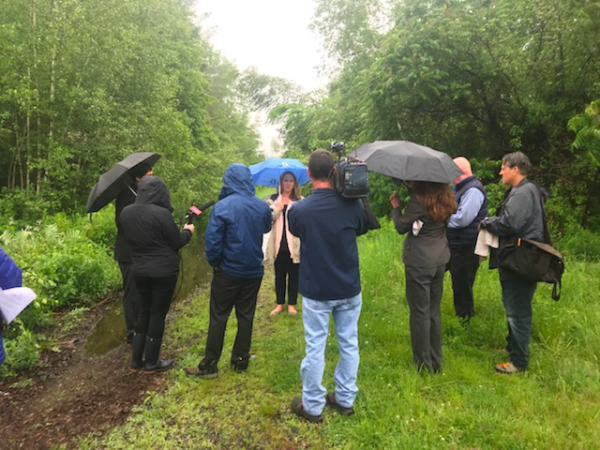 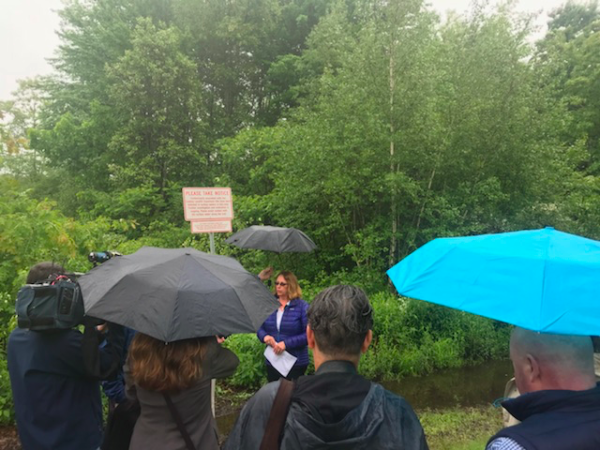 The privately owned Coakley Landfill was used to dump industrial and municipal waste from 1972 to 1982. In recent years, PFAS –including PFOA and PFOS– and 1,4-dioxane have been found in groundwater monitoring wells at the site at levels exceeding EPA health advisories.The chemicals have also been found in residential drinking wells. PFAS chemicals and 1,4-dioxane are both suspected carcinogens, and the Coakley Landfill has been a primary target for the state commission tasked with investigating a pediatric cancer cluster in neighboring towns.

“In February of 2016, I discovered the Coakley dump, a site so toxic it was listed on the EPA’s national priority Superfund list, was less than a mile from the home my husband and I had built to raise our young daughters 6 years prior,” said Jillian Lane, Greenland resident and founder of the neighborhood group Greenland Safe Water Action. “We have watched as our neighbors have detected PFAS in their wells at levels that can impact human health. PFAS is known to be leaching from the site into Berry’s Brook. Enough is enough, it is time to clean up this known threat to our community so we don’t have to think twice when our children have a glass of water to drink, are brushing their teeth, or taking a bath, or just playing in the sprinkler in our yards.”

Lane met with Cook’s predecessor, Albert Kelly, in Washington, D.C. in April along with representatives from other Superfund sites across the country. Kelly agreed to visit the Coakley site at that meeting but resigned before he could do so. His successor, Cook, is following through on the commitment.

Lane hosted EPA and USGS staff at her home, along with representatives from Conservation Law Foundation and Community Action Works. She then led the group to nearby Berry’s Brook, where surface water has tested as high as 18 times the EPA’s advisory limit for drinking water. Earlier this year, NH Fish and Game ruled that fish caught from Berry’s Brook could not be eaten due to the stocked fish having some of the highest concentrations of PFAS known in the world.

The group reconvened with a larger group of neighbors that evening, and New Hampshire’s Congressional delegation was also invited.

Lane presented a petition with 135 signatures to Cook and Dunn calling for an effective clean-up plan at the site, expanded residential well testing for every home in the pathway of the groundwater contamination plume, access to safe water and filtration for affected residents, and a strong national standard for PFAS contamination that protects human health.

“In plain English, the current “monitored natural attenuation” plan basically means “watch, but do nothing.” However, PFAS and 1,4-dioxane are fast-moving and long-lasting in water,” said Woody Little, New Hampshire Community Organizer with non-profit Community Action Works. “The communities in the path of this pollution plume need better than a “do nothing” plan. We’re calling on EPA to show real leadership and come up with a real clean-up plan that has the polluters pay for their pollution. Simple as that.”

“It’s clear that the Coakley Landfill is polluting nearby water sources, putting our environment and the health of local residents at risk,” said Tom Irwin, Vice President and Director of CLF New Hampshire. “It’s also clear that the current approach to this Superfund site isn’t adequate. The EPA has the ability and the responsibility to implement a new remediation plan to end this toxic pollution problem, and it’s our strong hope they’ll do so as quickly as possible.”

“We are encouraged that USEPA is willing to hear concerns from impacted community members to address these many issues” said House Representative Mindi Messmer of Rye, New Hampshire who has sponsored several key pieces of legislation to investigate the environmental triggers for the double pediatric cancer cluster, lower the drinking water standard for PFASs, and to require pollution clean up.

The meeting comes only days before the executive committee of the Coakley Landfill Group meets in Portsmouth on June 7th, the first such meeting open to the public, and only weeks before an EPA Region 1 Summit on the agency’s strategic plan to address PFAS on June 25th-26th at the Pease Tradeport in Portsmouth.

“We’re encouraged by the attention the regulators are giving our community and the interest being shown regarding surface water contamination around Coakley and on PFAS issues in general,” said Lane. “But our families have had our health threatened for years, during most of which we were totally unaware. We are looking to see action that is protective of public health.”