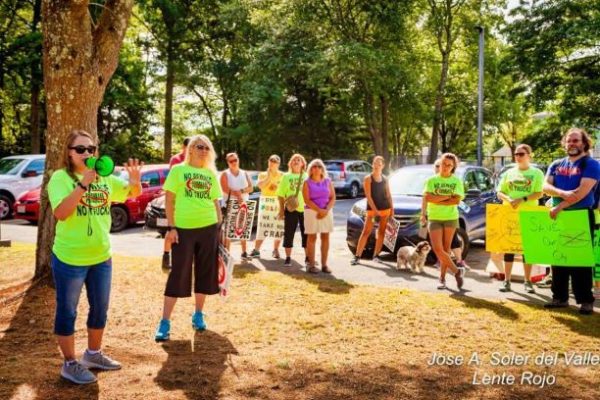 Community Action Works first connected with Wendy Graça in 2015 when a massive fracked gas project was proposed on the South Coast. That proposal included two huge high-pressure gas storage tanks and a pipeline that would have gone right through Wendy’s driveway.

But South Coast Neighbors United didn’t stop there. Instead, Wendy and her neighbors kept working for a healthier South Coast. Wendy organized an environmental film series, which provided two free community screenings of a new film every month for a year. She also helped other local grassroots groups build campaigns to fight dirty energy projects and advocate for renewable energy growth by sharing more about South Coast Neighbors United’s work.

This project would mean more than 400 additional diesel truck trips per day on a residential road where traffic is already an issue, and these would be carrying sewage waste. Residents fear that if this project goes through, the odor, air and noise pollution would get worse.

We believe that our communities are strongest when neighbors have the power to make the change they want to see. South Coast Neighbors United has a vision. The group already has the organizing skills and experience from their campaign to stop the fracked gas pipeline and storage. They’re putting those skills to work to fight back against pollution, fight for solutions, and build toward their vision.