Mindi is a mom, water scientist and former lawmaker who ran for office because of her concern about per- and polyfluoroalkyl substances (PFAS) contaminating water in the Seacoast Region of New Hampshire. PFAS, a class of chemicals linked to cancer, kidney disease and other serious health concerns, has been found in drinking water in communities across New Hampshire, the Northeast and the country. 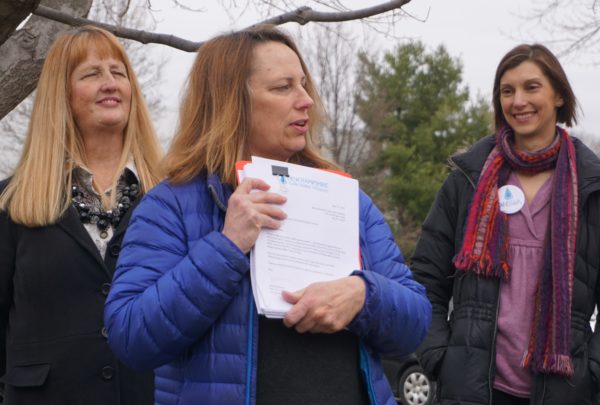 We believe that no one should be poisoned by PFAS-contaminated drinking water, and we have a plan to make that vision a reality. To protect everyone, we need change at the federal level. But under the current administration, states need to lead the way. We’re working on the ground with communities to push for state-level changes that will become models for the changes we want to see at the federal level. And the Northeast is leading the way on these changes.

In New Hampshire and in Vermont, activists have worked to pass strong and enforceable drinking water standards for PFAS. Following several years of tireless advocacy and organizing by Mindi, grassroots groups including New Hampshire Safe Water Alliance, Testing for Pease and Merrimack Citizens for Clean Water, and along with scientific analysis by groups including The Endocrine Disruptor Exchange, New Hampshire passed a law mandating that the state set enforceable drinking water standards for four PFAS chemicals. When these standards were announced in January 2019, they were not health protective. Mindi raised visibility about the harm from PFAS by organizing a showing of the documentary, “The Devil You Know,” in 30 communities. Each showing included a panel discussion resulting in the collection of 1,700 signatures and a commitment from hundreds of people to send emails to state legislators. The state listened— and in July passed the strongest, most protective standards for PFAS in the country!

“Never underestimate the power of your voice and a grassroots coalition. We have been able to accomplish so much in our fight against special interests and big corporations who care more about the bottom line than public health.”

New Hampshire isn’t alone in having dedicated activists win major victories on PFAS water contamination. Activists and partners together in Massachusetts pushed the state to begin the process of establishing enforceable drinking water standards to protect communities from the Berkshires to Cape Cod. While this fight is far from over, this is a crucial step in making sure that contamination disasters like this don’t happen again.