Teddi Kalfopoulos is 74 years old. She’s a retired career counselor and a writer. And she’s been a resident of Peabody, MA for more than half her life.

When Teddi was five, she had polio. That’s how she and her parents ended up in an accessible home in Peabody when they immigrated to the U.S. from Greece. Decades later, Teddi still lives in that same house.

“Living with a disability is like a job—it’s not easy to take care of my body,” said Teddi. “My antennas have to be up for everything that concerns my wellbeing.”

And it’s a good thing her antennas were up a few months ago!

Teddi was checking the local news when she saw a post about a plan for a peaker plant in Peabody. She didn’t know what that meant, but she was determined to find out…

As Teddi learned, a “peaker” plant is like a backup power plant for our energy grid. If we need an additional boost of energy, a peaker plant will turn on to meet the need.

The problem is this peaker plant, with its 90-foot smokestack, would pollute the air because it runs on a combination of fracked gas and oil. 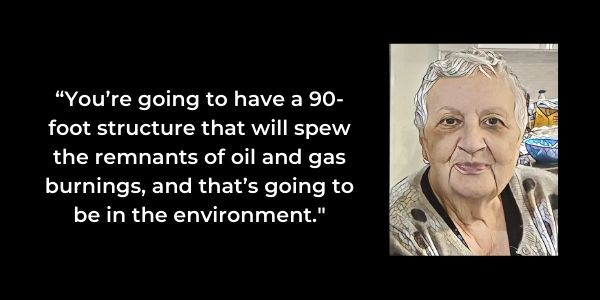 And somehow, nobody—not even the city council—knew this was happening until just a few months ago.

Teddi looked online for more information. She saw an article in The Salem News that helped her connect with neighbors who were fighting this. And she found our own community organizer, Mireille.

“The more I looked into it, this was going on for a long time… I just was unaware it was happening,” she said.

Teddi wouldn’t call herself a community leader, but she knew she wanted to do something.

And as more and more people learned what was happening, concerns about health, safety, and the environment grew and grew. They formed a group called Breathe Clean North Shore.

Soon, the public outcry became too loud to ignore.

Teddi says the older she gets, the more outspoken she becomes. “I grew up as a person with a disability and I was put down a lot in my life,” she shared. “I’m just so sick and tired of that. Now, when I see something is wrong, I’m going to speak up.”

Flash forward to June 11 when local leaders like Teddi delivered more than 1,000 petition signatures opposing the plant to headquarters. 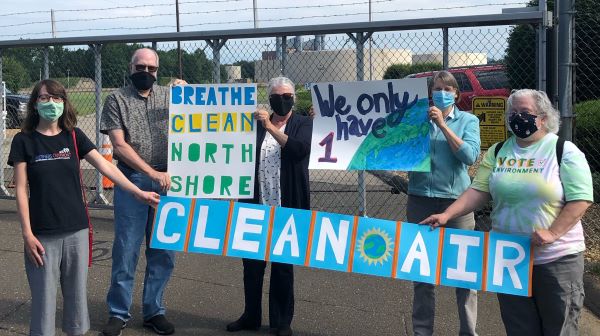 And just two nights ago more than 120 people showed up for a community meeting that lasted 4.5 hours. Neighbors raised questions about the need for the plant, the health impacts, the lack of transparency, and a lot more.

This work would not be possible without people like you. Your support is what fuels us.

As Teddi said, “This is not just Peabody or Massachusetts or the U.S. The whole world is looking for different avenues for energy.”

The campaign to stop the peaker plant in Peabody is still growing. Your ongoing support makes this work possible—thank you.