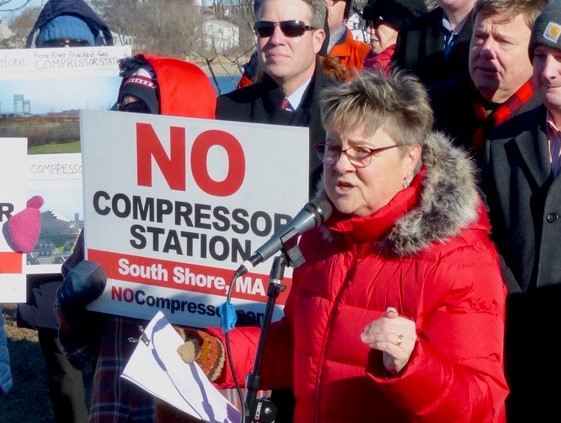 Alice Arena from Fore River Residents Against the Compressor Station speaks out at a rally at the site where a dangerous compressor station is proposed in Weymouth, Mass.

Across the region, neighbors are banding together in opposition to fossil fuel projects that threaten their health and  their communities. But the best defense is sometimes a good offense. That’s why the activists and advocates of Mass Power Forward are leading the charge to enact laws to promote clean, renewable energy.

This year, Mass Power Forward kicked off its second legislative session as a coalition, and is prioritizing three key goals to lead the way for renewable energy. The first is environmental justice. Low-income communities and communities of color are more likely to have polluting facilities located in their communities, but less likely to be included in decisions about our environment or to benefit from environmental progress. We’re supporting a bill that would codify the equal protection and meaningful involvement of all people in creating environmental laws.

Third, we want policies that invest in a healthy, sustainable future. We’re working to put a price on carbon in the transportation and home heating sectors, making sure that the revenue generated gets spent equitably and sets a strong standard for other states to follow.

Four years ago, Community Action Works Campaigns co-founded Mass Power Forward to bring together the people working for clean, renewable energy in Massachusetts. Some of the first activists in the coalition were residents who were previously involved in stopping fracked gas pipelines in the state and who would have been most directly impacted by the state’s reluctance to transition off fossil fuels. They were leaders such as Cathy Kristofferson in Ashby, who helped stop a fracked gas project that would have laid a pipeline right through her town and Mary Ann Babinski in Westfield, who started organizing to stop a fracked gas power plant proposed in her city.

Mass Power Forward has grown since then, and in 2019 it’s stronger than ever. In January, the coalition launched its campaign at the State House with more than 130 activists, who held 45 in-person meetings with their representatives about supporting the bills—in just one day. Those same activists joined Andrea Honore—the Weymouth activist continuing a months-long, daily sit-in in Gov. Charlie Baker’s office to oppose a dangerous fracked gas compressor station—in solidarity to stop the project and end our state’s investment in new fossil fuel infrastructure.

The Mass Power Forward coalition is ready to take on the challenge of leading the way toward a healthy and just Commonwealth.