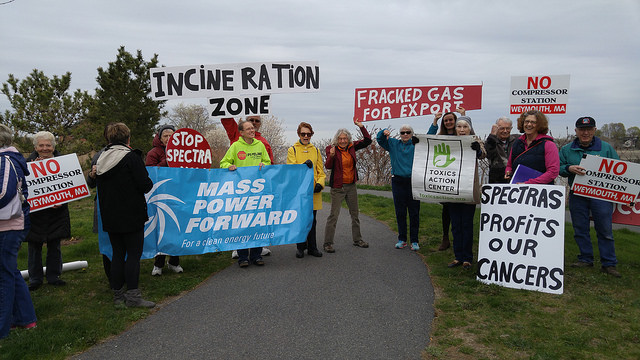 Despite the fossil fuel industry’s efforts to vastly expand fracked gas infrastructure in our region, we have continued to prevail in stopping the biggest projects with your help, including the Fore River Compressor Station in Weymouth, Mass. This summer, after increasing pressure and negative media attention from community leaders, Massachusetts Gov. Charlie Baker finally put the dangerous project on hold.

Here in New England, we have been a leader on transitioning away from coal and expanding efficiency and clean energy, and decisions we make will set a precedent for the nation. Now more than ever, as Washington, D.C., rolls back protections for our health, environment and climate, our states must continue to lead.

This story begins south of Boston, in Weymouth, Mass. Spectra Energy, now known as Enbridge, proposed building a 7,700-horsepower fracked gas compressor station. Compressor stations are the lynchpin of a pipeline, and the most powerful and polluting part. Operating like the heart of the pipeline system, they pressurize gas to be pumped across hundreds of miles. Normal operations release into the air at least 10 cancer-causing chemicals, including benzene and formaldehyde.

“People don’t realize that compressors regularly release anywhere between 15,000 to 15 million cubic feet of methane—along with those chemicals the gas was fracked with—can you imagine?” said Alice Arena, a community leader with Fore River Residents Against the Compressor Station (FRRACS).

It’s easy to understand why residents like Alice are concerned. Our organizer Claire Miller first met Alice at a public hearing on the compressor station proposal two years ago. At that time, her group was just getting organized. Claire grabbed clipboards out of her trunk and together, she and Alice passed around a signup sheet for FRRACS to grow their list of supporters. It was great timing—the packed room of neighbors was angry and ready to act after they saw federal government officials interrupt the mayor and prevent others from speaking out.

No community deserves this type of industrial polluting facility, and the proposed Fore River site for the compressor station is located in a densely populated area already burdened by multiple sources of industrial and vehicular pollution. There are more than 900 homes within a half mile, and thousands of kids live or go to school within one mile of the proposed site. More than 13,000 children attend school within three miles of the site!

Unfortunately, federal permits for fracked gas infrastructure are often a rubber stamp, but Gov. Baker and other state officials have a chance to stop this plan from moving forward. This past fall, Gov. Baker put the project on hold while the state conducts a health study. It’s not over yet, but the state’s action is an important milestone for the region and the first time Gov. Baker has acted to slow or stop new gas infrastructure. Congratulations to Alice and FRRACS for their hard work and determination!