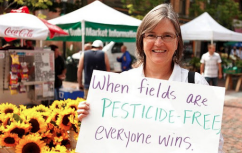 Erika Rosso was with her five-year-old daughter at a playground in Bar Harbor, Maine, when another mother warned her to wash her child’s hands and clothes when they got home. Pesticides had been sprayed at the playground the day before.

Pesticides are dangerous for all of us, especially children, so Erika was outraged and decided to take action. She connected with a few other mothers—all with children age five or under— and started asking questions. But Bar Harbor refused to share details about toxic pesticides used on the playground, and the moms decided it was time to push for a townwide ban on pesticides.

There’s good reason to believe that a ban on pesticides is possible. In recent years, you helped activists in Portland and South Portland win some of the country’s strongest citywide pesticide bans, leading the way for other towns in Maine to do the same.