Longmeadow and Holyoke take on fracked gas in Western Mass. 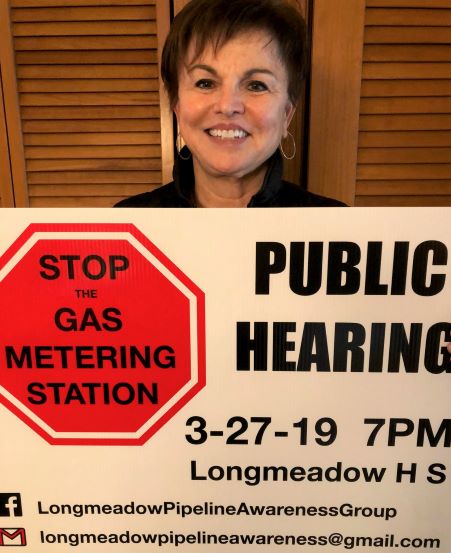 Even for activists who have long been in the fight to stop climate change, it’s still a shock when fossil fuel companies hit close to home.

Shocked—that’s how Michele Marantz felt when she found out that new fracked gas projects had been proposed in her hometown of Longmeadow, Massachusetts. One of the projects, slated to be built right next to an elementary school, is called a metering station, which measures gas flow. That project would enable new pipelines and allow the expansion of fracked gas in western Massachusetts for decades to come.

Michele isn’t new to taking action to protect the environment and public health. So, right away, she formed a group of concerned neighbors called the Longmeadow Pipeline Awareness Group. But like most people who are fighting a major pollution threat at the local level, the group needed help making a plan to win and putting that plan into action. Michele called Community Action Works, and our organizer Mary drove down to meet with her and her neighbors and train them on how to organize around an upcoming hearing and win a community vote.

The group in Longmeadow isn’t alone—activists in nearby Holyoke, Massachusetts, weren’t about to let this project happen, either. Around the same time that Michele learned about the proposal, our longtime partners at the powerful community organization Neighbor to Neighbor started organizing to stop the pipeline from crossing Holyoke, too. Fossil fuel pollution is a threat that touches us all—Holyoke is a multiracial, low-income city, and Longmeadow is a predominantly white, upper middle class town. And because Neighbor to Neighbor leaders had faced threats like this before—including in our partnership to retire a coal-fired power plant in Holyoke and transition to solar energy instead—they stopped the Holyoke branch of the pipeline in its tracks.

The fight is ongoing in Longmeadow, where Michele’s group won a key victory when residents voted to prohibit metering stations in residential neighborhoods, effectively banning the project in town. Although they are waiting to see how the gas companies respond, that victory, along with Neighbor to Neighbor’s victory in Holyoke, is a crucial step toward stopping this project altogether. Now, Longmeadow activists are teaming up with activists in Springfield, Massachusetts, where the proposed pipeline would go right through Forest Park and a neighborhood with a daycare center and elementary school.

Leaders like Michele know that we need a transition to clean, local, renewable energy now to protect our health, climate and environment. Your support is making that future possible.