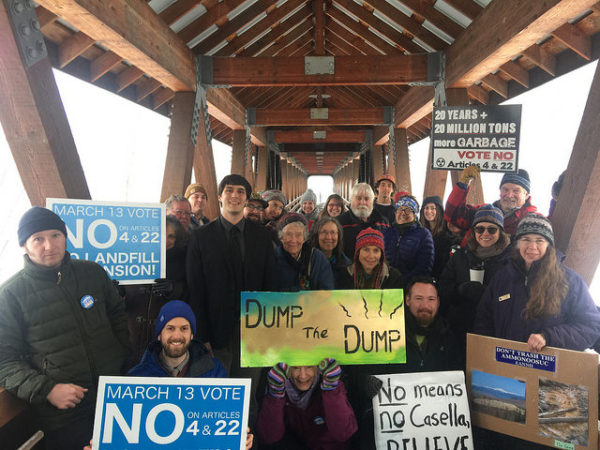 “This is another black eye to Casella,” said Jon Swan of Save Forest Lake, fighting a new Casella landfill proposal in neighboring Dalton. “Expanding on existing landfills or building new landfills is going to be a tough business when you’re up against residents who want to protect our health, the environment, and the North Country way of life.”

“Bethlehem has been voting to stop this landfill expansion for over 25 years and during that time, this has divided the town,” said Andrea Bryant of Environmental Action of Northern New Hampshire (EANNH). “It is appropriate and exciting that the landfill will be capped in accordance with the timeline set forth by the 2012 Settlement Agreement. Hopefully, now Bethlehem can live in peace.”

The information about Casella withdrawing their permit application for expansion is available on the NH Department of Environmental Services (DES) website.

“While Casella and NCES may try to request a new permit, this will restart the process,” said Sarah Doucette of North Country Alliance for Balanced Change (NC ABC). “I don’t know why they’d expect a different outcome when the public response has been the same over and over again with past requests for expansion: We don’t want any further polluting landfilling in the North Country!”

Towns across New England have found their drinking water contaminated with dangerous chemicals from leaking landfills. The EPA has said that nearly all landfills will eventually leak—and environmental organizations Community Action Works and Conservation Law Foundation have sued the Casella/NCES landfill for polluting the Ammonoosuc River.

“Year after year we’ve won at the ballot box to stop a landfill expansion in our town,” said Kristina Zontini of Growing without Garbage. “The North Country won’t be the dumping ground of New England any longer.”

Casella’ withdrawal of the permit application follows a DES determination that Casella’s privately-owned landfill in Bethlehem may not meet the public benefit requirement in NH law.

“We don’t need to burn and bury our trash,” added Shaina Kasper of Community Action Works. “By reducing our waste, reusing what we have, and recycling and composting what’s left, we can conserve our existing disposal capacity and move to a zero waste future.”

North Country residents and groups fighting against landfills and wanting to move towards the goal of zero waste have been coming together as the coalition BeSMARTNH (Save Money and Reduce Trash New Hampshire). Join the fight and learn more at besmartnh.com.