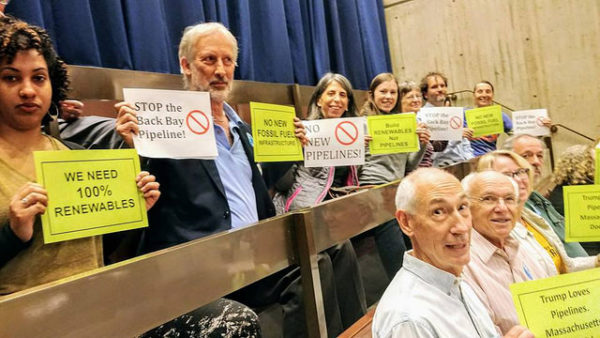 Boston – Local and statewide organizations are uniting in opposition to yet another proposed gas pipeline — this time, it’s right in downtown Boston: a proposed National Grid pipeline to bring in more gas through the South End and Back Bay, for luxury condos and hotels now under development. Today, the Department of Public Utilities heard a case for the expansion with active involvement from the Attorney General’s Office.  National Grid wants One Dalton—a luxury condo development in the Back Bay—to be an anchor customer to finance the controversial fossil fuel pipeline, and the contract between National Grid and One Dalton requires DPU approval.

“It was premature and inappropriate for the Boston Public Improvement Commission to issue a grant of location for the pipeline because the financing for this pipeline has not been finalized and may not ultimately be approved,” said Emily Norton, Executive Director Sierra Club Massachusetts Chapter and member Boston Clean Energy Coalition (BCEC).

The politics surrounding the pipeline have been on a roller coaster. Prior to the November election, the Boston City Council voted unanimously to ask the Public Improvement Commission to postpone making any binding decisions on a controversial pipeline proposal for the Back Bay. However, early in December the Commission moved forward without waiting for additional public outreach to the impacted neighborhood. The City has arranged for a public meeting with National Grid to take place January 16 at the Boston Public Library, but many are not satisfied.

A recent letter signed by eighteen different faith leaders from varied traditions was published in the Boston Sun and included this statement by Rev. Rob Mark, Church of the Covenant, Boston: “As leaders of faith communities here in the heart of Boston, we write with a unified voice to express our categorical opposition to National Grid’s proposed gas pipeline through Boston’s Back Bay neighborhood.”

Martyn Roetter, Chair of the Neighborhood Association of the Back Bay, said, “I am concerned about the foreseeable growth in the use of natural gas to meet the needs of the new buildings already approved and under review in Boston, which is inconsistent with the City’s climate change targets to significantly reduce greenhouse gas emissions over the next 10 to 30 years. As the resolution passed by the City Council calls for, careful deliberation is required to develop solutions that enable a transition to much lower and ultimately zero reliance on fossil fuels in buildings, and do not lock the City into long lived investments in additional natural gas infrastructure and equipment that will make these targets unachievable.”