Key Milestone Transitioning Away from Coal 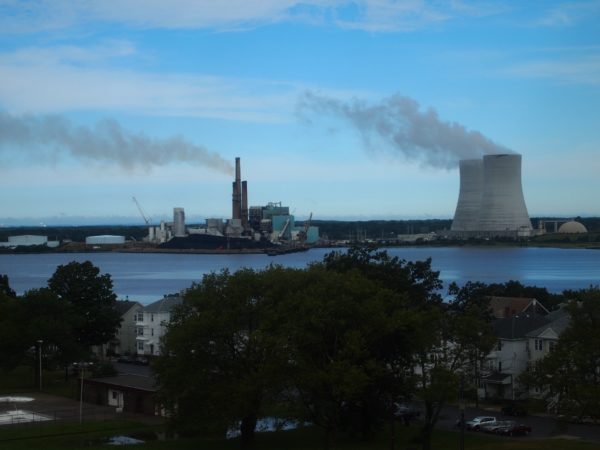 On Saturday April 27th, implosion of the large water towers at Brayton Point marks the next significant step in the demolition of the former coal-fired power plant, the largest fossil fuel power plant in New England for decades. At recent public meetings, representatives for Commercial Development Co. have reaffirmed plans to develop the Brayton Point Commerce Center designed to support offshore wind development.

“This seems like a big day to celebrate on the road toward a clean air and clean energy future,” said Pauline Rodrigues, Somerset resident and member of Coalition for Clean Air South Coast. “For decades, the pollution from the plant has weighed heavily on our town and our region. We plan to monitor next steps closely as it won’t feel like the job is done until we see wind development moving forward on the ground.”

“This is a milestone for local residents working for years for cleaner air and a healthier, thriving economy for Somerset,” said Sylvia Broude, Executive Director of Community Action Works, a public health and environmental non-profit that has worked alongside community members since 2006. “The cooling towers and smokestacks were symbols of the polluting power of the past, and I hope this brings a new chapter in Somerset’s history as a leader in the off-shore wind and clean tech industry.”

“The fight for climate justice is one of the biggest battles we face,” said Cindy Luppi, New England Director, Clean Water Action, who has partnered with local leaders and health groups since the 1990s on these efforts. “We know our children’s future depends on us moving away from the burning of coal and other fossil fuels, but we have to find real world solutions that show respect for workers and communities, and keep the lights on powered with clean energy at the same time. ”

“Together we’ve held on to the promise of a healthier and economically resilient community for years, one that would open up pathways for high road clean energy jobs and support for the community,” said Al Lima, Fall River resident and member of the Coalition for Clean Air South Coast. “Many said it couldn’t happen, we’re hopeful that today we’re on the path to that vision coming closer to reality.”

“Getting to this point has been often complicated and reflects the hard work of a lot of community leaders,” said Deb Fastino, Executive Director for Coalition for Social Justice. “We’d also like to recognize Representative Pat Haddad for her single-minded commitment to new offshore wind and a new chapter in clean energy for our region.”