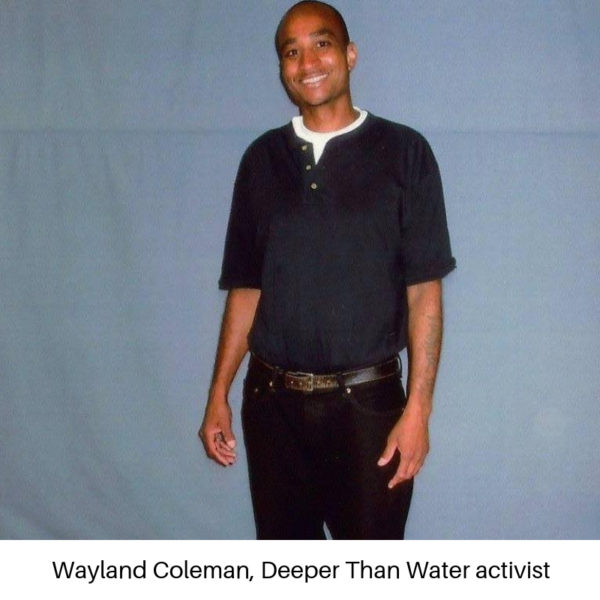 When prisoners in Norfolk, Massachusetts are given water to drink, the odds are good that it’s toxic.

The water could be anywhere from tea-colored to black at MCI-Norfolk, the state’s largest prison. The prison’s water is contaminated with toxic levels of manganese, which can cause neurological disorders similar to Parkinson’s disease. At a prison where half of the inmates are serving life sentences, the polluted water has devastating consequences.

Wayland Coleman is one person working to change that. Wayland is a leader in Deeper Than Water, a coalition of prisoners and abolitionist allies working against incarceration that formed in response to the toxic water and addresses injustice in prisons. He was imprisoned at MCI-Norfolk before being transferred to another prison for speaking out.

“Activism is an essential component of our existence,” said Wayland. “By organizing, I hope to restore the will to resist that may have been lost in any incarcerated man or woman, not just in Massachusetts, but across the nation.”

Environmental injustice means toxic prison conditions across the country. We know that communities of color and poor communities are more likely to live in polluted neighborhoods. When it comes to prisons, poor people and black and brown people in particular are more likely to be imprisoned—and many of those prisons are built on contaminated ground or near environmental hazards.

“Poor and especially black communities are heavily targeted by the police, the courts, and the school systems,” said Wayland. “If we are not fighting today against being labeled and treated as less than human beings, and we allow the prisons to oppress us without any opposition and warehouse us in environmentally unsafe conditions, then those children who are being targeted today will surely suffer in these very institutions.”

This cycle needs to end. To learn more and get involved, visit deeperthanwater.org or connect on Facebook. We’re proud to be on the steering committee of the Deeper Than Water coalition and work alongside activists seeking justice.