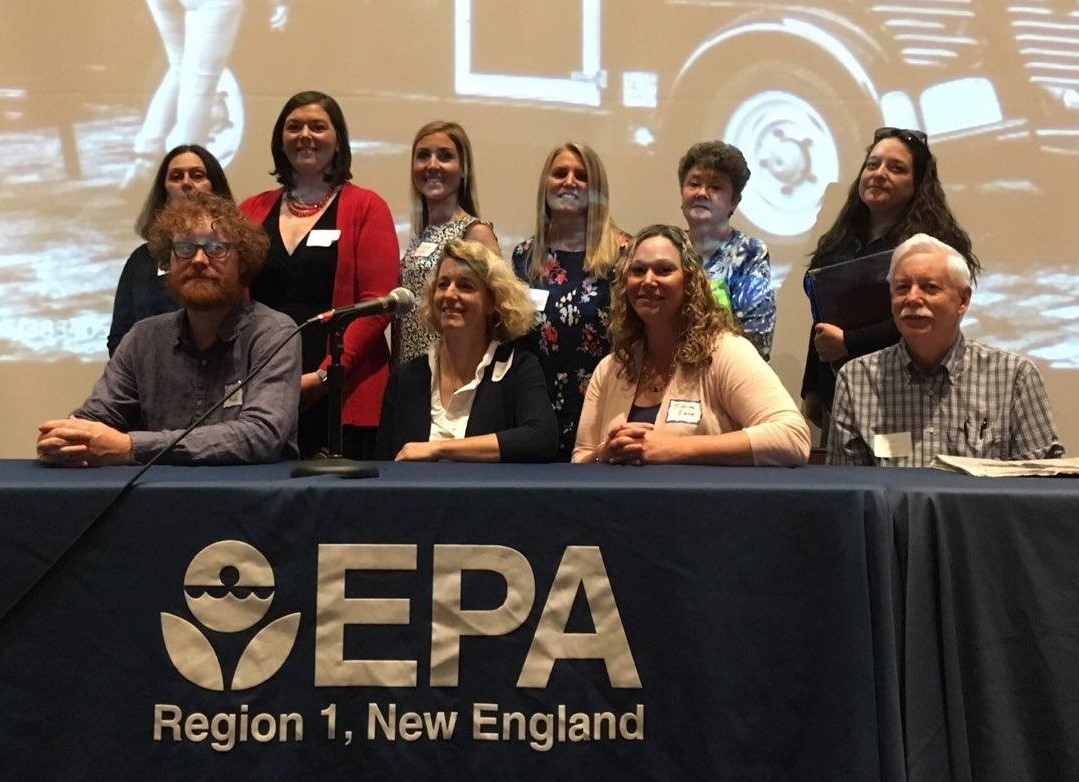 [Exeter, NH] – Monday night the EPA kicked off its first Community Summit on PFAS in the country at Exeter High School in Exeter, New Hampshire. PFASs, or per- and polyfluoroalkyl substances, are chemicals linked to reproductive cancers, kidney disorders, decreased immunity and other serious health problems. Communities dealing with PFAS contamination in their drinking water from all over New England came to share their stories and demand stronger action from the agency.

Kristen Mello, an impacted resident from Westfield, MA, presented directly to top EPA officials, including Alexandra Dunn, Region 1 Administrator, and Dr. Peter Grevatt, Director of the Office of Ground Water and Drinking Water. Kristen shared how she and her family have personally been affected by PFAS contamination.

“I have been drinking contaminated water for decades, and every member of my immediate family has been diagnosed with medical conditions that are known PFAS health effects in other communities,” said Mello, co-founder of community group Westfield Residents Advocating for Themselves. Mello stated that the response to PFAS contamination in Westfield has been inadequate at the federal, state and local level. “I’m outraged that it’s taken this long for the conversation with EPA to start. I don’t know of many other Department of Defense PFAS sites that are not on the National Priorities (Superfund) list. I’m here to ask the EPA for help for Westfield. We need a national enforceable drinking water standard, and we need help to make sure polluters pay instead of victims.”

Of particular concern was the EPA’s inadequate health advisories surrounding PFAS chemicals. Although the EPA has published a health advisory for two of these chemicals (70 ppt each for PFOA and PFOS), there is currently no federal enforceable drinking water standard for any PFAS chemicals. Under that Safe Drinking Water Act, a federally enforceable standard–called a maximum contaminant level (MCL)–establishes a hard legal limit for the amounts of certain chemicals allowed in public drinking water throughout the United States. Mello, along with several other community members from Massachusetts, New Hampshire and Vermont, demanded that the EPA create a much lower standard: 1 part per trillion total for all PFAS chemicals combined.

“This Summit is the first of a series of promised Regional Summits for community groups facing PFAS drinking water contamination to have their voices heard. For the past year, I’ve been facilitating the National PFAS Contamination Coalition, which now has 16 community groups representing impacted communities from 11 states and Guam. Their stories of how their lives have been turned upside down from these poisonous chemicals are numerous, powerful, and profound,” said Shaina Kasper of Community Action Works. “Their health is the only thing EPA should consider in setting a national standard on PFAS, and the best recent science suggests there is no safe level of these toxins. The responsible standard is 1 part per trillion.”

Other communities that presented included Cape Cod, MA, Greenland, NH, Portsmouth, NH, Merrimack, NH, and Bennington, VT. After the presentations, 47 community members testified in a public comment period, sharing how the contamination has impacted their lives and demanding that the EPA take strong action.

The meeting comes after the long-awaited release of an Agency for Toxics Substances and Disease Registry study–suppressed for months for fear of a “public relations nightmare”–that revealed health threats for PFOA and PFOS at levels much lower than the EPA’s current health advisories. When community members learned that the study was being hidden and that they wouldn’t be invited to participate in the EPA’s national meeting on the chemicals, they advocated for other ways to voice their concerns.

“After I met with Administrator Pruitt in May, he promised to have regional meetings like this around the country. We’re proud for New England to host the first of these meetings,” said Andrea Amico, co-founder of Testing for Pease in Portsmouth, NH. “We hope that EPA follows through on their commitment to the other communities across the country voicing frustration and gives us all a say in the national PFAS action plan.”

“At Community Action Works, we’ve seen over and over again throughout our 30 years how polluters will go to great lengths to avoid taking responsibility for their messes and how government bureaucracies can be too slow to do the right thing,” said Woody Little of Community Action Works. “Impacted community groups across the country were barred entrance to the National Leadership Summit, so this is the best chance for impacted communities to have their perspectives incorporated into the National PFAS management plan EPA will release this fall. We need to make sure that this pollution gets cleaned up, and we need a strong limit on PFAS in water to make sure that something like this never happens again!”

“The residents in Portsmouth deserve to know what’s in their water,” said Catherine Corkery, Director of New Hampshire Sierra Club. “Clean water is a human right. Yet the City and Pruitt’s EPA are failing to take meaningful action for this community. We’re here to hold leadership accountable for the mess they’ve failed to clean-up and the threat it poses to mothers, children and people across New Hampshire. We need action now.”

“The only way for EPA to rebuild trust with impacted communities after hiding a federal report on PFAS health treats is with real meaningful action to clean up these poisons,” said Mary Jones of Community Action Works. “That’s what communities need, and that what we’re looking for.”