At Community Action Works, we believe that environmental threats are big, but the power of well-organized community groups is bigger. Our community has accomplished amazing things this year, even while overcoming major challenges—and that’s worth celebrating.

COMMUNITY-LED VICTORIES FOR HEALTH AND ENVIRONMENT 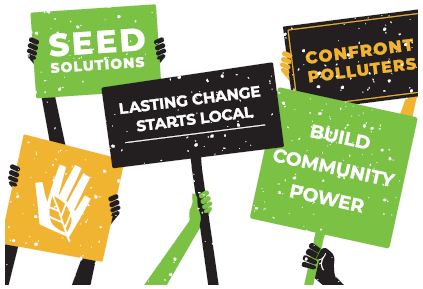 This summer, Kathy Beckett, Stuart Blood, Jon Chaffee, Phil and Judith Bush and other members of Sustainable Lebanon and the Upper Valley Pipeline Coalition won a major victory when they stopped the Lebanon-Hanover fracked gas depot and pipeline from running through New Hampshire’s Upper Valley.

In Eliot, ME Charles Pettigrew and his neighbors formed the Little Brook Environmental Association and won the closure of a polluting junkyard that threatened their drinking water.

Leaders like Miriam and Aaron Osofsky, Meg Sheehan, John Tuthill and Laura Simon of the Upper Valley Clean Air Committee came together to oppose Dartmouth College’s proposed biomass incinerator and to protect the air quality for everyone, and they won when the proposal to build this incinerator was halted.

Mass Power Forward, the clean energy and climate justice coalition we co-coordinate in Massachusetts, built enough support to get environmental justice in a climate bill passed by the House legislature after years of educating legislators on why this matters.

Community leaders in the National PFAS Contamination Coalition are celebrating that many states have passed strong drinking water standards and are gearing up for more national fights against the “forever” chemicals known as PFAS.

Community leaders in Pueblo Verde, a group based in Lawrence, MA that came together after fracked gas explosions in the Merrimack Valley, won a settlement from the company responsible to relieve energy bill debt and invest in renewable energy.

Neighbors fighting to stop local trash incinerators, including Deb Panetta, Elle Baker, RoseLee Vincent and Jackie Mercurio of Alliance for Health and Environment fighting an incinerator in Saugus, MA and leaders from Neighbor to Neighbor and Arise for Social Justice fighting a biomass incinerator in Springfield, MA, won more public hearings in the state’s process to develop a Solid Waste Master Plan for the next 10 years, meaning more time to get our voices heard.

NEW COMMUNITY LEADERS IN OUR MOVEMENT

Our community is growing! This year, we got connected with Camille Madison, Rachael Lovely and Hartman Deetz of Eastern Woodlands Land and Water in Mashpee, MA who are fighting to ensure the Wampanoag people are able to exercise their inherent aboriginal rights with ease, without obstruction, and free of harassment or conflict. This includes hunting, fishing, trapping, gathering, and accessing beaches, as these rights are essential to the existence and foundational to the identities of Indigenous people.

We connected with Craig Dias and Laurie Ball of Scituate Concerned Citizens who are working to raise awareness in Scituate, MA about the impacts of an unsealed town dump and building a neighborhood park with sidewalks.

Leaders like Gladys Moreno started Hartford Coalition for Safe Technology, fighting a 5G cell antenna from being located in the heart of a Latinx neighborhood in Hartford, CT, a city already overburdened with pollution.

In Corinna, ME we worked with Bill and Tina Turner, Mike Gale, and Rob McQuillan to form the Phinney Road Landfill Coalition for Safe Water, a group fighting for comprehensive water testing to address PFAS contamination from a local leaking landfill.

THANK YOU TO THESE INCREDIBLE LEADERS

Community leaders continue to rise up against Massachusetts and New Hampshire’s subsidies for biomass power plants that would give this polluting energy a boost. Thank you to leaders like Ernesto Cruz, Sarah Reyes, Susan Grossman, Jackie Velez, Zaida Govan, Zulmalee Rivera, Jesse Lederman, Verne McArthur, Susan Theberge, Marty Nathan and many others in the Springfield Climate Justice Coalition in Massachusetts and John Tuthill and Katie LaJoie and others in New Hampshire for keeping up the fight.

Leaders like Ed Spencer, Hillary Lister, Bill Lippincott, John Banks, Cheryl Robertson, Peter Crockett, Chuck Leithiser, Antonio Blasi and members of Don’t Waste ME and the Penobscot Nation have been fighting the Juniper Ridge Landfill in Old Town, ME for over 17 years. This year, they’re closer to victory as they work to close a loophole to stop out-of-state waste from ending up in Maine landfills, push for environmental justice, and move the state towards a zero waste system that protects communities living near landfills.

Leaders like Roberta Zuckerman, Rachel Burger, Abby Huntoon, Priscilla Skerry, and Judy Kline in Protect South Portland are fighting to hold oil tank farms accountable for their pollution, measuring and controlling their emissions, and providing the public with transparency and accountability.

Huge thanks to Cathy Kristofferson of StopNED and PLAN, Diane Cotter of Your Turnout Gear and PFOA, Cheryl Robertson of Don’t Waste ME, Wendy Graça of South Coast Neighbors United, Andrea Honore, and Elizabeth Deutsch for speaking on our virtual training series this year.

Alice Arena and leaders in the Fore River Residents Against the Compressor Station (FRRACS) continued the fight against a polluting fracked gas compressor station in Weymouth, MA with a level of dedication to their community that is profoundly inspiring.

Incredible leaders fighting to stop polluting landfills in New Hampshire, including members from North Country ABC, Save Forest Lake, Forest Lake Association, Working on Waste, and A Better Claremont and more came together to win real solutions and move to zero waste by forming Be SMART NH (Save Money And Reduce Trash).

Leaders like Wendy Graça and Tracy Wallace of South Coast Neighbors United pushed to protect their cities and towns from new polluters while Save Our Bay Brayton Point – Clean Air Clean Water worked for clean, renewable energy instead of polluting industry on the former site of the coal-fired power plants that retired years ago.

Thanks to leaders like Michele Marantz of Longmeadow Pipeline Awareness Group, the Columbia Gas Pipeline Campaign, and No Ashland Gas Pipeline for keeping up the fight to stop fracked gas in Massachusetts.

Debbie Cooper, Roderick Pease, Linwood Violette and the Hartland Environmental Advisory Team (HEAT) continue to push to stop pollution from a sludge landfill in Hartland, ME.

It takes all of us to stop pollution and seed solutions across the Northeast and beyond. But together, we can build the power to transform our world. Happy holidays from all of us at Community Action Works.