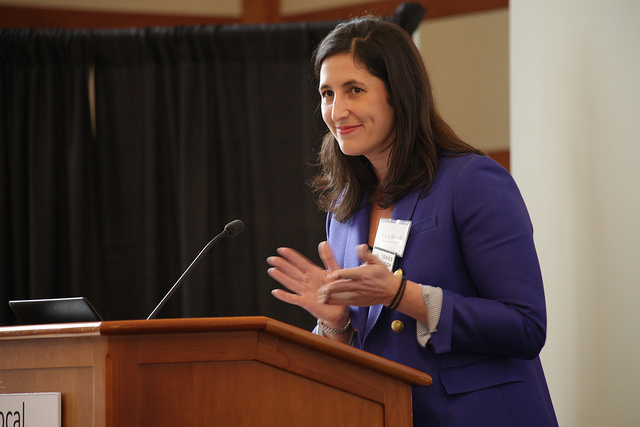 It’s hard to know where to start when it comes to making sense of current events. I don’t have to tell you what a bad year it’s been. And to be honest, things were looking pretty bad even before Trump took office a year ago.  Most days, it’s easy to feel like we’re further than ever from our vision of a better world. On climate and environmental justice, we are far past the point of no return. We have a workshop today about Puerto Rico, where four months after a devastating climate-fueled storm, half a million U.S. citizens still lack electricity, and for weeks residents drank water from a Superfund site.

And it’s not only the petrochemical industry that we’re up against – it’s an assault on core values of equity and justice and human rights. It’s efforts to divide our society and pit people against one another. It’s a system which allows big business to decide the future of our country, even when 90 percent of voters disagree.

Three quarters of Americans want to see aggressive action to slow global warming. Even 62 percent of Trump voters support taxing or regulating global warming pollution. Yet, our climate policies are being systematically dismantled. 97 percent of Americans support universal background checks (including among gun owners) and two-thirds support a nationwide assault weapons ban. Yet Congress has done nothing. Nine out of 10 Americans support legal protections for Dreamers. Yet instead of embarking on a legal path to citizenship, these young people are facing the threat of deportation.

But in midst of dismal headlines, I’ve found hope — hope in the growing power of our grassroots movement for change. For me, the past year reinforced more than ever that the communities with the most at stake should be leading our movement for change.

Like you, I’m still reeling from the the shooting at the Parkland Florida High School that left 17 people dead two weeks ago. At this point, the story-line is sickeningly familiar: a white man with red warning flags gets his hands on a weapon of war and… a massacre ensues. Thoughts and prayers. Pledges of policy change. And then the story usually fades.

But this time the story has a twist, and her name is Emma Gonzalez. The 18-year-old Latinx senior and president of the school’s Gay-Straight Alliance captivated the country after her speech at a gun control rally went viral. There’s so much hope in the resilience of Emma and her classmates who have responded to tragedy and trauma by standing up, speaking out, and saying #NeverAgain.

Or there’s the Dreamers I just mentioned, who, facing the separation of their families and deportation from what is for many the only home they’ve ever known, stand, in their words, undocumented and unafraid,  joining together to form a powerful volunteer-led movement centered around the voices of their families. Undocumented leaders have been targeted by ICE for their political activities, and so these brave individuals and their families speak out at great risk.

And #MeToo, the movement against sexual harassment and assault coined by Tarana Burke in 2007 and transformed into a viral social media storm earlier this year. This movement is powerful because it’s centered around survivors, especially women of color who have long been erased or asked to stay silent.  We’re lucky to have Loretta Ross here today who will draw some connections between women’s rights, reproductive justice and environmental justice. Change is slow, but it sure seems like we’re on the brink of a major cultural shift.

And #BlackLivesMatter, whose leaders hold strong and continue to organize in loving memory of Erica Garner and in the face, still, of unrelenting state violence against Black communities.

We’ve seen how powerful the environmental movement can be when we center our organizing around the frontline and fenceline communities facing the worst threats, threats many of you have experienced first-hand. And here in the northeast, we’ve seen a rising political consciousness, as people are starting to see their battles as part of a larger system of injustice, driven by the same interests.

Take Andrea Honore from Weymouth, Mass. Andrea learned about about a compressor station planned for her neighborhood, part of Spectra’s Atlantic Bridge project. Every day for 82 days, Andrea spent her lunch hour at Governor Baker’s office to politely request a meeting about the compressor. #SitWithAndrea became a rallying cry that inspired two months of growing demonstrations culminating in a 300 person action. And Andrea and Alice Arena and others from Fore River Residents Against the Compressor Station have become powerful voices for our movement against fossil fuels and for 100% renewable energy. For months Governor Baker said the decision was out of his hands, then last summer faced with mounting public pressure, he ordered a health study that could delay the project for up to a year.

Or take Mary Martin, from Cornwall, Vt., an insurance salesman, a farmer and a grandmother. And until recently, Mary was a global warming denier. Then one day land agents from Vermont Gas Systems showed up to survey her land for their fracked gas pipeline, and Mary was mad as hell. She joined with other impacted neighbors to form the group, Just Power, and together they turned out hundreds to hearings and Mary led a group of grandmothers to stage a knit-in at the company headquarters. The company ultimately withdrew its application for that phase of the pipeline!  Mary later joined her town’s energy committee working to get solar on town buildings and has joined with other communities fighting fracked gas.

Or Zulma Rivera, whose daughter developed severe asthma during her very first year at the Gerena Middle School in Springfield, which has serious indoor air contamination from mold growing there. The problem is so bad parents regularly drop by the school at lunch to bring kids their asthma inhalers. It’s no coincidence that this problem is in Springfield’s North End neighborhood, the poorest district in the state! Zulma, a Neighbor to Neighbor leader, joined long-time organizers in the North End like Maria Perez and Ana Andino to form the North End Coalition to fight for a safe school, all while drawing connections with the school to prison pipeline.

I’m inspired by the courage of these women and countless others across our region who were faced by a problem that was so profound and so personal that they were forced into action, and who through taking action came to recognize that their efforts are part of larger struggles for justice. By leaders, like Carlos Rodriguez of Neighbor to Neighbor or Cathy Kristofferson from StopNED who didn’t stop fighting when they stopped the pipeline or closed the coal plant, but instead went on to work for 100% renewable energy for all. By groups like #DeeperThanWater, not only fighting for clean water for those incarcerated at the Norfolk Prison, but also working to abolish prisons. Because when you’re at the heart of a problem, you can see what really needs to happen. And that, as many of you know, is the basis of our work at Community Action Works.

We were inspired into being by the parents in Woburn, Massachusetts, who took action to investigate high rates of childhood cancer after twelve children died of leukemia linked to drinking water contamination. And in 1987, we were created to provide assistance to local residents facing problems like the families of Woburn experienced, and today we have 11 staff working across the region. Without a doubt the most important thing we’ve learned over the past 31 years of doing this work is that hard times can bring us together to spur political action, and that neighbors banding together and drawing bright lines between right and wrong, between David and Goliath, will bring us closer to our vision of clean air and clean water, healthy, just and vibrant communities and a government that acts responsively and democratically for all its citizens.

And yes, times are indeed hard right now. That’s why I’m so glad you are all here today. Now more than ever, we need to be present here together, to share our stories, sharpen our skills, build new connections, and get inspired for the next critical year of doing this work.  I can’t thank you enough for being here, and for your courageous work.