The way we handle our waste has major impacts on our health and climate, and activists across our region are working to bring about a Zero Waste alternative to landfilling and incineration.

Katie Lajoie of Charlestown, NH, is a registered nurse and longtime anti-incinerator activist who started working on this issue more than 30 years ago. That was when a waste company proposed an incinerator in Claremont, the city next door. She recalls listening to a chemist clearly explain the dangers of waste incineration and thinking that surely the incinerator wouldn’t be built. 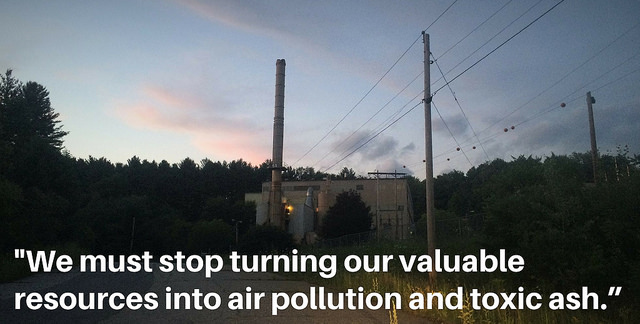 But the incinerator did get built and Katie and a group of her neighbors organized. They founded Working on Waste (WOW) to promote safe alternatives to waste incineration. Burning trash pollutes the air with dioxin — one of the most toxic known chemicals — along with a host of other dangerous toxins such as mercury and lead. The Claremont incinerator began bringing waste to Claremont from across New Hampshire, Vermont, and the northeast, and WOW began uncovering ways to challenge it.

One of the ways they fought back wasn’t just about waste, but about energy. In addition to air and ash pollution, incinerators generate inefficient and high-cost electricity.

“One of the big money makers is the electric contract that goes with waste incineration, and this is something that people challenging incinerators should monitor closely,” said Katie. “Here in Claremont, an electric contract allowed Wheelabrator to sell electricity at about twice the prevailing market rate.”

In state after state, waste companies such as Wheelabrator have tried to get trash incinerators classified as renewable energy sources, which would grant them subsidies intended for truly clean energy projects like solar and wind. When they win, the results are frightening. A trash incinerator in Baltimore, MD, is the city’s single biggest air polluter and also the recipient of $10 million in green energy subsidies over the past six years.

When Wheelabrator’s supporters in state government tried to designate incineration as a renewable energy source, Claremont-area residents objected, telling state legislators that burning waste is not green energy. This was a key piece of a powerful campaign that closed the Claremont incinerator in 2013.

Although the incinerator is no longer operating, residents are still calling for it to be fully dismantled and are promoting clean energy like solar instead. Unlike incineration, solar doesn’t come with a steep cost to public health.

As for Katie and other activists in New Hampshire, the work on waste hasn’t stopped. Now, they are challenging the state’s decision to renew the operating permit for the Wheelabrator incinerator in Concord, NH. They want the state to work with them on a plan that transitions New Hampshire away from incineration and leads to closure of the Concord incinerator within two years.

“People say that waste is a verb, not a noun, and that it is something we do,” said Katie. “I like that idea because it encourages responsibility for how we handle our valuable resources. We must stop turning these resources into air pollution and toxic ash.”

Activists in cities and towns across the region are leading the way to Zero Waste. Waste is a problem that has a solution, and together we can solve it.