“Don’t Pay Polluters, We Breathe What They Burn – The Public Says “NO!” to Gov. Baker’s Proposal to Increase Wood-Burning Power in the State 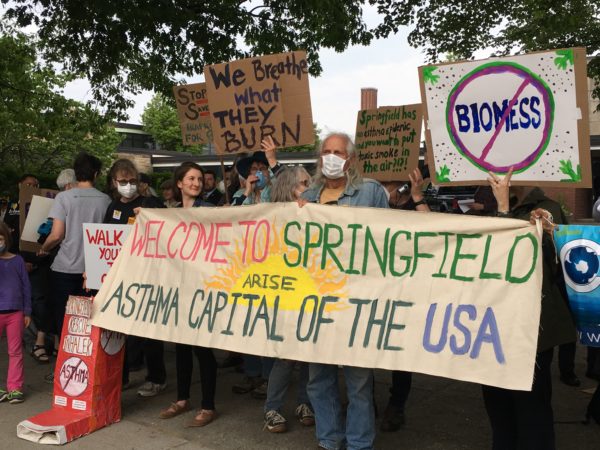 Springfield, MA —On Wednesday evening the auditorium at John J. Duggan Academy was packed with over 200 people who came out to show opposition to the Baker Administration’s plans to allow large-scale wood-burning plants to be subsidized as renewable energy.

Over 60 people signed up to speak at the hearing, many against proposed changes to the state’s Renewable Energy Portfolio Standard at a public hearing convened by the Massachusetts Department of Energy Resources (DOER), saying incentivizing wood-burning biomass would increase pollution, exacerbate asthma, and accelerate climate change.

“Clean renewable energy does not come out of a smokestack” said Jesse Lederman, City Councilor at-large for the City of Springfield. Fellow Councilor Melvin Edwards from Ward 3 added “We ask that you not use taxpayer dollars to subsidize a private project because it will have a negative impact in on my community.”

If DOER goes ahead with the proposed changes, the Palmer Renewable Energy project, a 35-MW wood-burning power plant proposed in East Springfield, would be eligible for more than $10 million in renewable energy subsidies annually. Three Springfield City Councilors, multiple residents, physicians, and environmental groups argued that the plant will have particularly grave consequences for the City of Springfield’s air quality and the well-being of its residents.

“If you betray Springfield, biomass gets $10 million in subsidies and Springfield gets what? Higher rates of asthma, worse air quality and a laundry list of problems that come with it,” said Tanisha Arena, Executive Director for Springfield-based Arise for Justice.

“We are in the midst of a climate crisis across the globe and we are concerned that environmental justice communities, like Springfield, will be hit first and worst by the impact of climate change. We should be investing money to promote clean forms of energy, rather than laying the groundwork for wood-burning biomass plants like the one proposed in Springfield,” said Katy Pyle, Environmental Justice Organizer for Arise.

“DOER hasn’t provided a shred of scientific evidence to support this rollback of environmental protections, which will damage forests and increase greenhouse gas emissions and air pollution just as the climate crisis is intensifying,” said Dr. Mary S. Booth, Director of the Pelham-based Partnership for Policy Integrity. “If these regulations are rolled back, notoriously polluting plants in Maine will receive tens of millions of dollars per year from Massachusetts ratepayers and the Palmer plant in Springfield will have the money it needs to move forward with construction. This is nothing more than a giveaway to the biomass industry.”

Prior to the hearing 100 people stood outside the auditorium, confronting state agency members with a banner saying “Welcome to Springfield, The Asthma Capital of the USA.” Springfield has been named the “Asthma Capital” of the US two years in a row by the Asthma and Allergy Foundation of America based on asthma prevalence, emergency room visits, and asthma-related deaths. Participants held signs saying “Don’t Pay Polluters,” “Save Our Community,” and “No Means No DOER,” and wore buttons saying “We Breathe What They Burn.”

“The public is out in force today because regulatory changes would put a wolf in sheep’s clothing,” said Mary Jones, Community Organizer at of Community Action Works. “They would allow dirty biomass, like the proposed Palmer Biomass Project in Springfield, to masquerade as ‘renewable energy’ even as they spew toxic air pollutants linked to asthma, heart disease, and cancer into neighboring communities. We can’t let that happen.”

See more information about how the PRE biomass plant in Springfield would benefit from DOER’s proposed rule change.