After Deadly Gas Explosions, the Effort to Fight Pipelines Continues 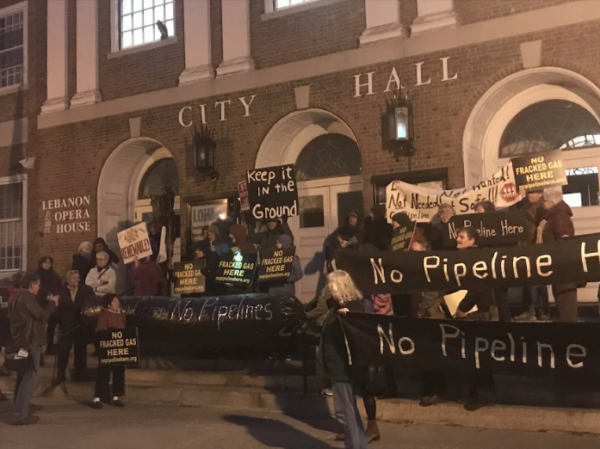 When fracking giants including Kinder Morgan and Enbridge proposed major pipelines crossing our region, we organized with community members from dozens of cities and towns in a powerful campaign that kept these dangerous polluters out. Faced with strong community opposition, energy companies are now trying a different strategy: proposing smaller pipelines targeting just a few towns at a time in the hopes of avoiding widespread resistance efforts.

Of course, smaller pipelines are not less dangerous. Once these pipelines get built, they will be used for decades to come—extending the region’s reliance on fossil fuels at a time when we need to shift to renewable energy. According to the most recent report by the Intergovernmental Panel on Climate Change, we’ll experience many of the impacts of climate change much sooner than previously predicted—as soon as 2040, just 21 years from now. We need to make critical progress on clean energy.

In Lebanon, New Hampshire, a group of concerned neighbors is determined to show that building new fossil fuel infrastructure is the wrong direction for our climate, community health, and the well-being of neighboring towns. Fracked gas is also a threat to public health and safety, as seen as recently as last fall with gas explosions in three Massachusetts towns. Activists in Lebanon are concerned about the threat that the proposed fracked gas pipeline and storage depot could bring to their community, and the threat that polluting energy brings to our climate. Kathy Beckett, Stuart Blood, Phil Bush and other local residents are joining together to say, “No pipeline here!”

With your support, we’ve helped these neighbors organize over the past year. Together they pushed Lebanon to remove fracked gas from its master plan, putting the city’s renewable energy goals in direct opposition to investment in more fossil fuel infrastructure. They formed the group Sustainable Lebanon, recruited new climate and energy activists in town, and joined the Upper Valley Pipeline Coalition to stop the proposed pipeline system. In October, Sustainable Lebanon delivered a petition with more than 1,100 signatures from local residents and Lebanon High School students, calling for the city council to take every legal and regulatory action at its disposal to halt the plan from moving forward. Jon Chaffee, of Lebanon’s Energy Advisory Committee, organized a business conference showcasing sustainable heating options as alternatives to fracked gas. With yet more residents involved, including neighbors surrounding the proposed site, the movement in town to stand against dirty energy is growing.

Lebanon is one of many communities in New Hampshire and across our region facing new fossil fuel infrastructure proposals and fighting back. We’re ready for a future that is fossil fuel-free. With activists like these leading the way, we know we can get there.