Congrats to the Lake Iroquois activists! 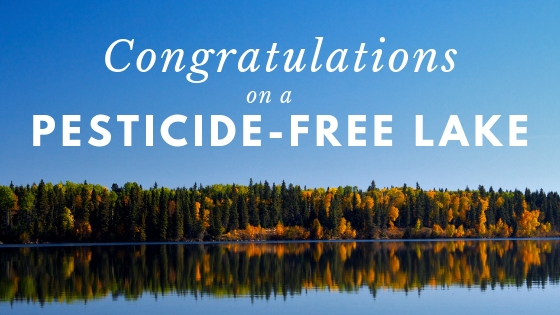 A groundbreaking grassroots victory could impact pesticide use across Vermont.

It all started when a group of neighbors took a stand against the town’s plan to use toxic pesticides on Lake Iroquois, a small lake just outside of Burlington, to stop an invasive plant. Neighbors were concerned that the pesticide Sonar would threaten the health of the lake and the safety of their drinking water.

Residents knew they wanted to protect the lake for future generations. So they formed the Concerned Citizens of Lake Iroquois and started organizing. They packed public hearings, won media attention, and called on the town to use healthy alternatives to toxic chemicals.

What were the threats they faced? No swimming or drinking from wells near the lake for at least 24 hours after the pesticide is applied. No watering gardens with water that draws from the lake for 30 days. Harm to the lake’s ecosystem and the aquatic life that call it home. Despite the risks, the town still hadn’t fully tried safer, non-chemical alternatives to pesticides.

Years of hard work paid off this fall when the permit to use pesticides on Lake Iroquois was denied. The groundbreaking decision marks the first time that the Department of Environmental Conservation has permanently denied a permit of this kind.

The grassroots victory means long-term protection for the lake and surrounding towns. But the impacts stretch beyond Lake Iroquois. We’ve always known that each activist who steps up and each local win is part of a bigger movement towards a world where we can breathe clean air, drink clean water and live in a healthy, sustainable environment. The ripple effects from this victory will be felt in communities across our region who are working to go pesticide-free.

We are proud to stand with groups like the Concerned Citizens of Lake Iroquois who are standing up for their health and environment. This decision was the first of its kind in Vermont, but we know it won’t be the last.