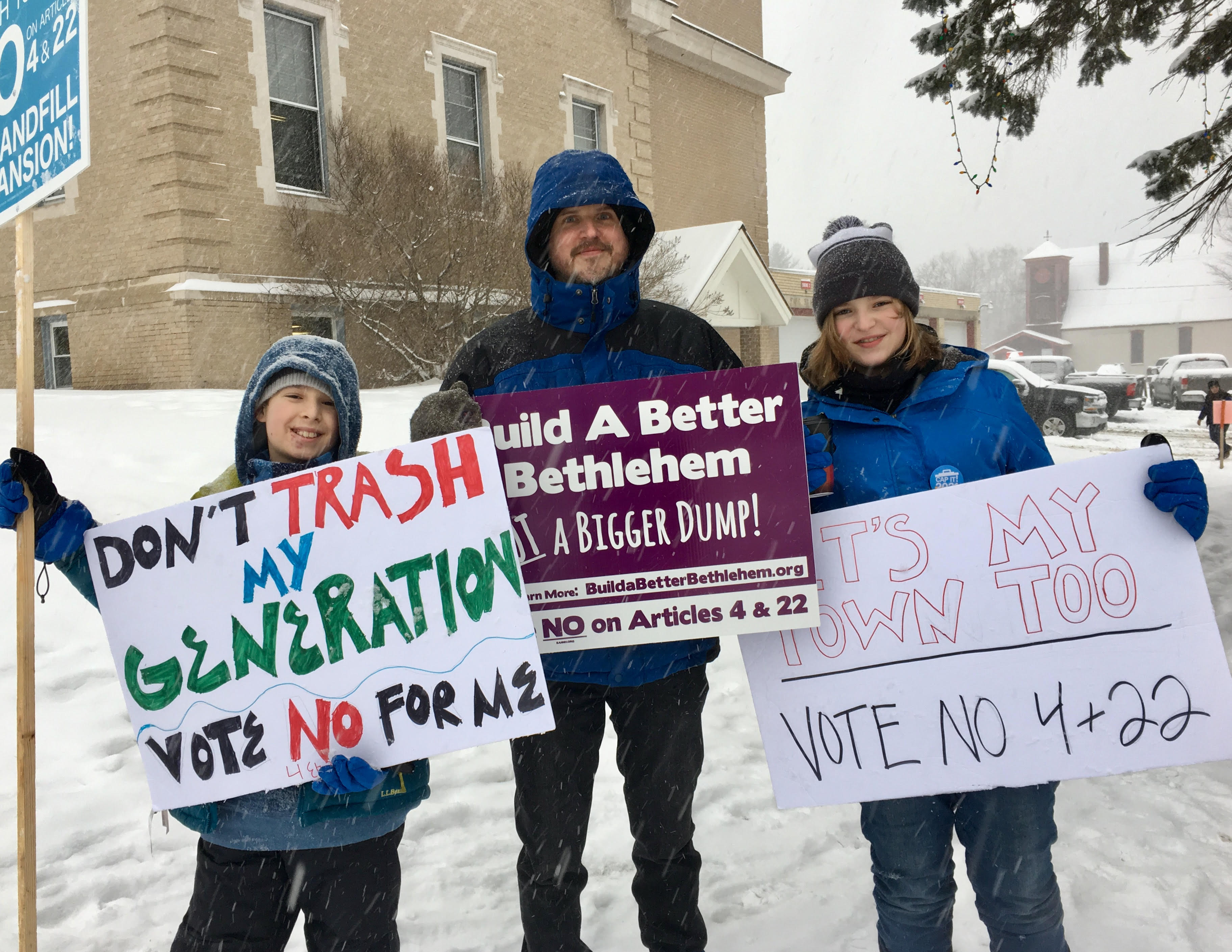 [Bethlehem, NH] — Once again, Bethlehem residents vote to protect their health, the natural environment, and economic diversity by rejecting the proposed landfill expansion.

The Casella landfill, owned by North Country Environmental Services, has been seeking an expansion that would nearly triple its current size. Residents of Bethlehem have come together to reject this expansion — which would have brought more waste and threats of pollution into the community — and support healthier investments that diversify the town’s economy instead.

The landslide vote against the expansion comes after efforts by local community groups — such as Environmental Action of Northern New Hampshire (EANNH), Build a Better Bethlehem, and Growing Without Garbage — to educate neighbors on the dangers of the landfill and envision a more economically and environmentally sustainable future for the town.

“Our vote shows that as a community we recognize the threats of the landfill, and we want a different, more sustainable future,” said Bethlehem resident and Growing Without Garbage co-founder, Kristina Zontini. “We want positive growth for Bethlehem, and we’re looking forward to coming together as a town to work towards that goal.”

In a record turnout despite yesterday’s snowstorm, Bethlehem voted against the landfill expansion in Articles 4 and 22 by a nearly 10 point margin. Voters also overwhelmingly approved the Right to Vote in Article 25, which will give the community a voice in the final decision, and Article 20, which will bring the town its own transfer station.

This is the second time in two years Bethlehem residents have rejected the expansion. The margin remained similar, despite dramatically increased activity and spending by Casella subsidiary NCES to promote expansion and discredit landfill opponents.

Bethlehem residents hope the vote will show Casella that the town does not want the expansion, and that neighbors will come together to put forward healthy solutions for growth.

“Casella’s defeat shows us that citizens can stand up to big, out of state corporations that attempt to use our town for multi-million dollar profits without regard for serious impacts on our environment and long-term economic success,” said Teresa Tupaj Wood, founder of Build a Better Bethlehem.

Towns across New England have found their drinking water contaminated with lead, arsenic, and dangerous chemicals from leaking landfills. Nearly all landfills will eventually leak a toxic mix — and environmental organizations Community Action Works and Conservation Law Foundation are planning to sue the Casella/NCES landfill for polluting the Ammonoosuc River.

“Growth shouldn’t come with a tax on our health,” said Woody Little, community organizer with Community Action Works. “We support Bethlehem residents in growing a town that doesn’t threaten the river and drinking water, but supports a sustainable future instead.”

Andrea Bryant of EANNH, is a long-time Bethlehem resident and has been fighting the landfill’s expansion for 30 years. “I’ve always been concerned about this landfill’s threats to the Ammonoosuc watershed and the future generations of North Country residents,” said Bryant. “This is the second vote in two years, and it’s time Casella got the message: Bethlehem is not New England’s dumping ground. Enough is enough.”

Growing Without Garbage is a group of Bethlehem residents whose mission is to present honest, straightforward, factual information to help educate our town about the NCES/Casella Landfill.