Another One Bites the Dust: Access Northeast Expansion Project Withdrawn 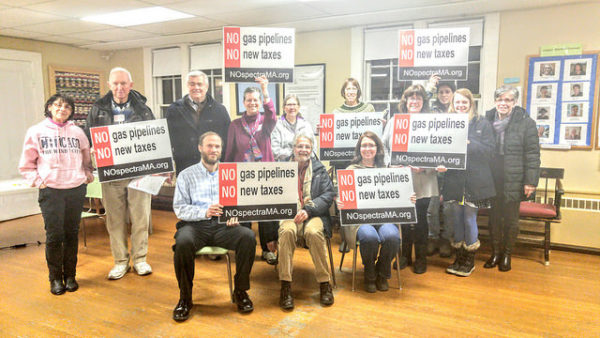 Thanks to the support of members like you, another pipeline project has been withdrawn! Like the Kinder Morgan Northeast Energy Direct pipeline, the Spectra Energy (now Enbridge) Access Northeast Expansion (ANE) was large with multiple pieces spread across the region. The proposal included 96 miles of pipeline, a new gas compressor station in Rehoboth, Mass., major upgrades to seven compressor stations in Rhode Island, Connecticut, New York and Massachusetts, and a massive storage facility with giant storage tanks for nearly 7 billion cubic feet of high pressure, liquefied gas.

In short, it was huge–and furthermore was only financially possible for the company if region’s largest consumer Massachusetts approved a “pipeline tax,” providing an unprecedented public subsidy.

This year our organizers worked with community groups in Rehoboth, Acushnet, Upton, Grafton, Norfolk, Sharon and Shrewsbury to pass town-wide resolutions against more fossil fuels. That opposition, combined with unanimous opposition from Massachusetts state senators and 97 state representatives against the “pipeline tax,” meant it was only a matter of time until this project too got shelved.

No Sharon Gas Pipeline president, Bri McAlevey, said, “We are delighted to see ANE withdrawn. Sharon residents have put a lot of hard work into stopping this project, and hand-in-hand with that we have also been working on moving Massachusetts towards clean energy. Even though ANE is gone, we’ll keep working on smart energy investments like wind and solar while we also support other towns still facing pipelines.”

Meanwhile, Rhode Island and Connecticut community leaders and advocates have also turned the tide of public opinion in their states. Ten years ago, when coal and oil was a much larger part of our electric grid, more gas seemed like a solution to many. Today, gas is already half of our energy portfolio, and it’s clear that we can’t afford to overbuild gas infrastructure that will lock us into more fossil fuels for decades to come. That’s why 32 of Rhode Island’s 39 towns passed resolutions against a massive gas-fired power plant proposed for Burrillville, RI and 21 towns in Connecticut have banned fracking waste. Food & Water Watch ally Jen Siskind ran a workshop at our annual Local Environmental Action Conference last March on how to pass bans on the toxic, radioactive fracking waste at the municipal level, and it’s working!

As New England heads towards being coal-free and elected officials in DC try to keep us dependent on fossil fuels, it’s important more than ever that we continue to stop the overbuild of fracked gas infrastructure and continue leading our nation towards a path for clean energy!