Activists win big in fight to protect our water 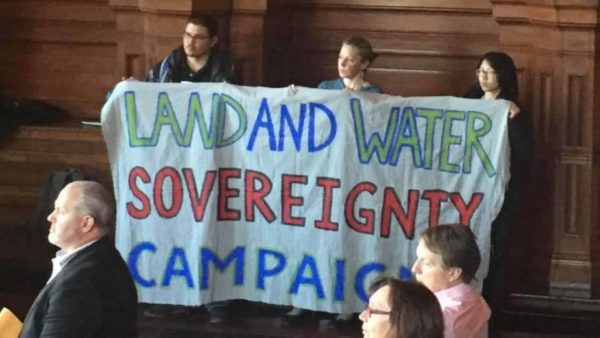 Is water a human right? Or a commodity to be leased or sold for profit?

That’s the question residents of Providence, Rhode Island were asking as government officials quietly moved forward plans to privatize the water supply that serves two-thirds of the state. But now, those same residents are celebrating: Thanks to local organizing, the mayor of Providence is backing out of the plan.

When we privatize public resources, everyone pays the price. Workers are more likely to face unjust labor practices and threats to unionizing. Public health suffers due to inappropriate infrastructure maintenance. Communities whose land rests on water supplies could have their land seized by eminent domain. The ecosystem where we get our water would be at risk in the hands of for-profit corporations.

But activists in Rhode Island got organized and fought back. The Water is Life – Land and Water Sovereignty campaign is made up of Black, Brown, Indigenous and people of color activists and allies who are leading statewide efforts to resist water privatization and put forward a vision for a water system that serves people instead of corporate profits.

“Our campaign is visionary-oppositionary,” says Cristina Cabrera, a leading activist in the coalition. “Yes, we oppose all these capitalist, exploitative, abusive practices, but we also are working centered on a vision where our land and our water is under the stewardship of the Indigenous way of life.”

Activists drafted a resolution demanding a moratorium for the Providence city council to stop all negotiations leading to monetization and privatization, and the mayor’s decision to halt legislation that would have privatized the water is a major victory. But the campaign seeks to do more than stop the negotiations. The coalition is working for a cultural and economic shift to stop privatization and commodification of our water.