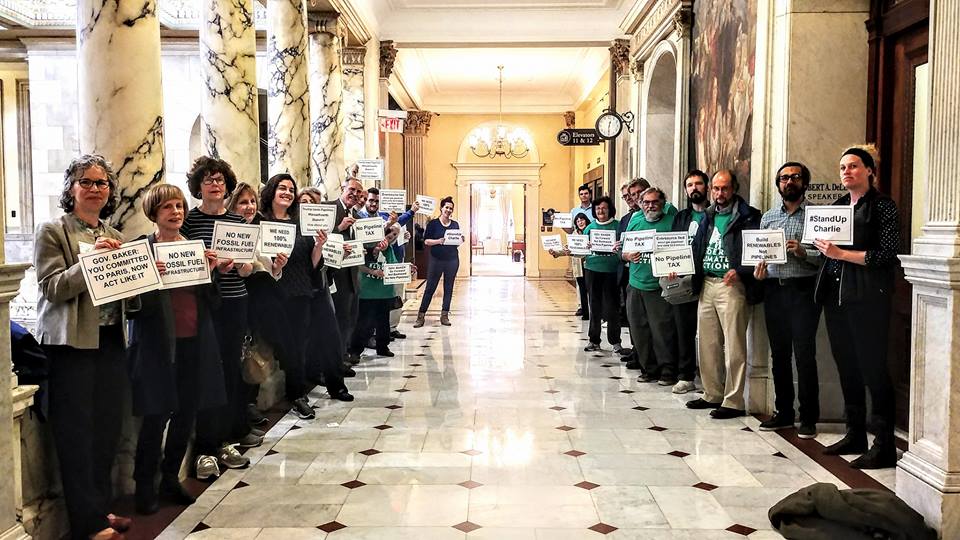 At Community Action Works, we’re getting more and more calls from communities and local activists across our region who need support and strategies to resist new fossil fuel infrastructure. As companies try to maximize profit from natural gas at the expense of our health and climate, a strong grassroots movement is more important than ever.

Three years ago, we stopped the massive Kinder Morgan pipeline in Massachusetts—a 250-mile fracked gas project that would have threatened the health and safety of 40 towns. Community Action Works staff worked with local community groups all along the pipeline route, building a business coalition, helping gather thousands of petitions, and holding a multi-day march across the entire state. Our efforts helped win the support of elected officials and ultimately stopped the pipeline. This was a huge community organizing victory, as hundreds of activists across the state came together and proved that the pipeline was both dangerous and unnecessary.

As activists lead the way in winning renewable energy resolutions, choosing efficiency, and building green, our region is beginning to turn away from fossil fuels and move toward a clean energy future. But companies are scrambling to keep our region hooked on fossil fuels. In New Hampshire, residents are facing a slew of proposed projects that are just as unnecessary and dangerous as ever. Liberty Utilities is proposing the 27-mile Granite Bridge pipeline, stretching from Manchester to Stratham, a storage facility in Epping that could hold up to 2 billion cubic feet of liquefied natural gas, and a pipeline between Lebanon and Hanover, among other projects.

But residents are taking action. Activists organized people in Hanover, N.H., to vote in favor of transitioning the town’s electricity to 100 percent renewable energy by 2030, and pushed Lebanon to include sustainable energy in its master plan. Now, city officials are speaking out against the pipeline, and their opposition has already resulted in exceptionally stringent conditions on the project. And across southern New Hampshire, residents are coming together to demand that officials reject the Granite Bridge Project, which would take the state in the wrong direction by expanding pipeline infrastructure.

We know that the real solution is clean, local renewable energy—we should be investing in and building renewable energy infrastructure. By helping residents stop pipelines and move their towns forward on renewables, we’re building our movement of clean energy leaders to transition our region toward that goal.